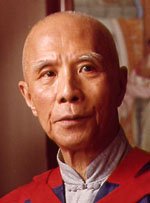 Your Excellency, there stands before you a man whose philanthropy is like the evergreens which it is his hobby to gro w in his garden at home – its branches widespread, its flowers are usually hidden from view, an it is perennial. Mr Tang Shiu Kin is a man who delights in anonymous benefaction, who believes that charity, having begun at home, should not end there but extend outside in all directions.

He was born in Hong Kong sixty years ago, and was educated at both Queen’s and St Stephen’s Colleges. In the late twenties he joined forces with his father, the late Mr Tang Chi Ngong, in helping the University make provision for the teaching of Chinese language and literature. The father donated the money for building the School of Chinese Studies which bears his name, while the son took an active part in raising funds from the Chinese community to endow it. Since then Mr Tang has contributed anonymously to the University on many occasions, and has given timely help to various University projects. His membership of the University Court dates back to 1933, the same year in which he founded the Kowloon Motor Bus Company, of which he has been Chairman and Managing Director ever since. It was Mr Tang who initiated the Grantham Scholarship Fund, heading the list of donations as he has headed so many others. His interest in education is further exemplified by his membership of the Councils or Committees of St Stephen’s College, St Paul’s Co-educational College, and the Aberdeen Trade School.

His other main interest has been in the social welfare of the people of Hong Kong. The Violet Peel Health Centre, or Polyclinic as it is now called, came into being in 1935 through his munificence and leadership in raising funds from among his Chinese friends; likewise the Maureen Grantham Health Centre at Tsuen Wan, and the extension to this in 1954. In the thirties, he founded the Hong Kong Women’s International Club, which he continues to support to this day. At the age of twenty three he was the youngest ever Director of the Tung Wah Hospital ever to be appointed. Five years later, in 1928, he was elected Chairman, and in that year the construction of the Tung Wah Eastern Hospital commenced. He became a Director of the Po Leung Kuk in 1927, and its Chairman in 1932; it was during his tenure of that office that the Kuk moved to its present site in Leighton Road. The range of his activities in social welfare may further be gauged by the following: he is an Honorary Vice-President of the British Red Cross Society in Hong Kong; an Honorary Vice-President of the Boy Scouts Association; a Council and Executive Committee member of the St John Ambulance Association and Brigade; an Executive Committee member of the Nethersole Hospital; a Trustee and Committee member of the Street Sleepers’ Shelter Society; a Committee member of the Hong Kong Society for the Protection of Children, and of St Christopher’s Home, Taipo; and he acts as Adviser to the Tung Wah group of hospitals, the Hong Kong Juvenile Care Centre, the Confucian Society, and the Chung Sing Benevolent Society. He is also a member of the Chinese Temples Committee and of the General Chinese Charities Fund Committee by special appointment of H.E. the Governor. He has served as a member of the District Watch Force Committee from 1928 to 1941, and as a member of the Urban Council for four years. He has also served as Magistrate, and in 1929 was appointed an Unofficial Justice of the Peace.

These services to the community, as constant and as manifold over the years as those of his buses in Kowloon, have brought just recognition and reward. He was designated a Member of the Most Excellent Order of the British Empire (MBE) in 1934, an Officer of that Order in 1949, and finally Commander in 1957. In the Venerable Order of the Hospital of St. John of Jerusalem he has become successively Associate Officer in 1934, and Associate Commander in 1952. In 1949 his Order awarded him the Silver Donat’s Badge, the second time only that this has been awarded in Hong Kong. His services to the University, though less well-known to the public, are just as numerous as those to the community at large, and therefore, Your Excellency, to his civic laurels, figuratively if not botanically, the University has pleasure in adding the Honorary Degree of Doctor of Laws honoris causa.