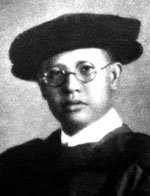 Dr Mustapha bin Osman is one of our distinguished Malayan graduates. Born at the turn of the century in Penang, he entered the University in 1917, and obtained his medical degree seven years later. For one, whose forebears, a generation removed, engaged in piracy in the Strait of Malacca, it was inevitable, perhaps, that he should prove to be a bold and fearless undergraduate whose passage was marked by a certain degree of turbulence. But if his alma mater had occasion to chastise him, she also found plenty to praise, for here was a natural leader both on and off the playing field, a man happy to meet any bowling life had to offer and hit it for six. After graduating, he spent a year abroad on a Rockefeller scholarship studying in the Universities of Edinburgh and London, as well as the Johns Hopkins University in Baltimore, before returning to serve on the staff of the University's Department of Pathology for five years. At the end of this period, in 1930, he obtained his MD degree and left us to take up an appointment as Government Pathologist in Kedah State, Malaya. This was the beginning of a distinguished career in government medical service, one which was to survive and emerge triumphant from all the trials and tribulations of the Japanese occupation and the birth of the Federation of Malaya. These years were to make a severe test of his courage and endurance, and call upon his resource and initiative to the full. In 1949 he was appointed Chief Medical Officer in Kedah, and as a member of the Federal Legislative Council of Malaya, and of the Council of State and Executive Council of Kedah, he was established, as a leading member of the community. One of the appointments to bring him most satisfaction was that of Governor of the new Lady Templer Hospital in Kuala Lumpur in 1952. He has also taken a keen interest in education, having served on the Malayan Education Committee, and on the Councils of Raffles College and the King Edward VII Medical School in Singapore.

On his retirement in 1955, he was designated Commander of the Most Excellent Order of the British Empire (CBE), and he has received a number of high Malayan decorations from the States of Kedah and Perlis. He continues to serve Kedah in a medical capacity, practising as clinical pathologist in Penang. Of this honorary graduand, Your Excellency, one of our professors years ago once exclaimed in despair, "Osman, why don't you go back to Malaya and plant paddy?" He went back to do far more than that, and it is with pride and affection that we have invited him here today to receive an Honorary Degree of Doctor of Laws honoris causa.