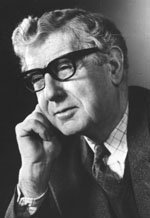 Mr Chancellor, those of us who are familiar with Kenneth Ernest Robinson’s articulate philosophy of the purpose and the function of a modern University recognize that in our Vice-Chancellor we have a Platonic form well suited to the democratic republic of letters in which we live. He is a man who does not faint or fail and who holds to his way with a passion until he has laid hold upon the essential nature of each thing. If he has concerned himself with the multiplicity of things it is only out of his concern for the feelings of others, and he has brought us time and time again, and at great expense to his spirit, to the essential nature of the tasks before us. He could have swept like a hawk through the dovecotes of our minds; instead he has chosen to nurture and persuade. With infinite demands on his own patience he has weaned us away from the habits of time and he has persuaded us towards a fresh conception of the sort of University necessary in these parts in this rapidly ageing twentieth century.

We have only to look around us to recognise the extent of his endeavour, and his success. With a student population which has grown over sixty per cent under his stewardship, we find them moving out into fresh fields of professional training and choosing their disciplines, proud in their capacity to think. In student terms, these are the years of healthy and constructive change for the University, and they are so because of Kenneth Robinson.

The secret of his success is that rare combination of his person of academic brilliance and administrative ability in equal parts, with a genius that flows easily from one side to the other, enriching both. He was awarded an Open Scholarship to Oxford at the early age of sixteen and was later awarded the Beit Research Scholarship after he took a double first in Modern Greats and History.

In the desperate years following the Depression, such talent could not be wasted and, although Kenneth Robinson had aspirations to become a don, he was chosen for the Civil Service. There, his superiors soon discovered that they had a man who not only could command a desk but men as well, and that he had a particular talent for sorting out other people’s problems, so he was sent out into the field. When we examine this stage of his career we can only conclude that our respected Vice-Chancellor was in his younger days and in our modern parlance, something of a trouble-shooter, with a field of operations which moved across the departments and stretched from a Cabinet Minister’s secretariat in West Africa to the creation of the World Health Organization in New York. At the end of the war he emerged as the head of his own department in the Colonial Office at the tender age of thirty-two.

Having displayed his professional competence Kenneth Robinson was remained of his youthful aspirations and he enrolled himself as a graduate student at LSE. The return of the prodigal to the academic fold was an event which did not pass unnoticed, and the graduate student was promptly invited to accept a Fellowship at Nuffield College and appointed to the Readership in the Commonwealth Government at the University of Oxford.

From that moment, he donned his sevenleague boots and began those giant strides which bring him to the exalted position he occupies today. Between 1948 and 1957 he was at Oxford, participating in the development of Nuffield College, and involved as well in that extremely crucial period in colonial affairs when the British Empire was transforming itself and so many states were feeling their way to independence and responsible self-government. His next stride took him to London, where he was invited to be Director of the Institute of Commonwealth Studies and Professor of Commonwealth Affairs at the University of London, a post which he held with much success for eight years, serving, amidst many other duties, as Editor of the Journal of Commonwealth Political Studies.

In coming to us, Kenneth Robinson has shown that administrative and academic qualities can find their expression, and simultaneously, in the same person. He has the shrewdness and common sense of a big business executive, the instincts and the quality of a scholar, and the heart and sensitivity of a poet. He has a knife-like mind in cutting through agenda detail, an ability to get to the heart of a problem – and the same sensitive perceptions he can apply to problems in African History. He can look a stiff balance sheet in the face with the same composure that he would muster when perchance he gazed at Fanti girl in dishabille: others would show emotion if not terror at the sight of either. Only rarely, in his case, is a warm heart linked with cool objectivity, and rarer still, in my opinion, a genuine humility.

Mr Chancellor, citations are by their natures backward looking, but it is clear that with Kenneth Robinson we have caught him poised at the point of taking another giant step forward in a return to a world of learning from which he has drawn his strength. Those of us who have worked with him have always been aware of the young don struggling to get out, of "the pen itching to glean that teeming brain, so that high-piled books in charactry hold like rich garners the full ripen’d grain". In regretfully releasing him we humbly request you to bestow on him, an outstanding servant and student of the modern British Commonwealth and an indefatigable worker in the cause of education, the honorary degree of Doctor of Letters honoris causa.