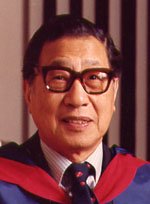 Mr. Chancellor: in his younger days Sir Yuet-keung Kan passionately wished to become a doctor. If he had he would have made an excellent family physician, for he has a warmth and compassion for his fellow man which has made him a part of all that he has met. Or he could have become a gifted surgeon, for he has the necessary precision and cutting edge. Or possibly a neuro-surgeon, for he has displayed an exquisite ability to dissect our public mind. Then again, when we consider his social conscience, it would be interesting to conclude that he may well have trod the path of other like-minded doctors in these parts and become a political reformer and revolutionary. But his father wanted him to become a lawyer while the family tradition had need of a banker, so being schooled in both the Chinese classics and the concepts of filial obedience he became both.

Sir Yuet-keung obtained his B.A. degree at the University of Hong Kong in 1934. He then studied at the London School of Economics and was articled to a London firm before returning here in 1938 to take up a career in banking and the law. His thorough grasp of each of these exacting fields has eventually made him a senior partner in the respected legal firm of Lo and Lo and Chairman of the Board of Directors of the Bank of East Asia. If commerce is the life-stream of our society it is contained in its course by the supporting banks of finance and the law. As we all know, Sir Yuet-keung has shown himself to be a mighty builder of banks and he has buttressed the dykes of our prosperity with the precision of a lawyer. The concrete results of his labours stand all around us and the confidence this brings is no small part of his achievement.

This achievement, which would prompt a lifetime of emulation by other men, has been but the means by which he has made his larger contribution to our society. Unsparingly, he has exercised his talents in the service of the community. As we review his long and distinguished career one is perforce astonished by the range of his activities. He was appointed an Unofficial Justice of the Peace in 1949 and to the Urban Council in 1957. Since 1961 he has served regularly on the Legislative and Executive Councils, becoming senior Unofficial Member in 1968. A man of energy, patience, and vision, he has constantly inspired our public deliberations. His qualities of leadership, often involving a combative defence of law and order, have given a much needed direction and discipline to our polyglot society. At times, Prometheus-like he has drawn fire from the heavens, not to shatter and destroy, but to dispel the shadows of complacency and sloth. He has brought clarity to our affairs and summoned us to a higher purpose.

Mr. Chancellor, it is the nature of luminaries that they are in fact larger than the images they project. To appreciate the real measure of Sir Yuet-keung's public service we should remind ourselves of his long hours of meticulous and careful labour unstintingly given and largely unnoticed except in the final result.

He has constantly displayed the rare capacity of the master builder, the ability to toil as well as to plan. As Chairman of the Board of Governors of Chung Chi College he involved himself in the academic planning of that institution, providing it with a constitution which essentially became the constitution of the Chinese University of Hong Kong. He has given his time unsparingly to our sister university, serving as a member of their Council from 1964 to 1967, and as chairman since 1971. He is a member of the Court of our University. He has served as chairman or member of the Public Transport Advisory Committee, the School Medical Service Board, the Hong Kong Authority, the Public Services Commission, the Social Welfare Advisory Committee, and the Finance Committee of the Legislative Council amongst others. He is the present Chairman of the Hong Kong Trade Development Council and serves on innumerable committees with a range of activities stretching from narcotics control to the preservation of Chinese temples, from the provisioning of playgrounds to the regulation of lawyers.

The disciplined sweep of his ordered mind has encompassed a rugged landscape of intractable wildernesses - the swamps and entanglements of our communal affairs - in which the ordinary man would have remained lost forever. He has even shown an ability to tame the bears and the bulls and. as a result of his endeavours, we may expect them to lie down together. His resourcefulness is matched only by his inexhaustible energy.

In his work Sir Yuet-keung has displayed the wisdom of a Solomon, the constitution of a Solomon, and the determination and strength of a Hercules in fulfilling the tasks which he has so readily shouldered and accomplished for the public good. The lodestar of his career, the guiding principle which has impelled him and encouraged others, is his complete integrity and unwavering faith in the future of our community.

Honours have naturally followed in his trail - the O.B.E., the C.B.E., and from the Chinese University the honorary LL.D. The well-deserved Knighthood came in 1972. It is a mark of the man that he wears these laurels as lightly as he shoulders his responsibilities. We would now wish to offer our tribute by asking you to confer on him the honorary degree of Doctor of Laws.