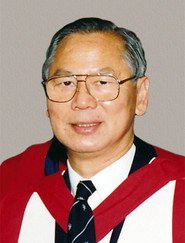 Born in Guangzhou, the centre of several revolutionary movements during the tumultuous years of Republican China, David Todd was to witness many unsettling yeas in has adolescence when the Resistance War against Japan an then the Civil War turned the political tide in favor of the Chinese Communist Party. He found his schooling days comprised whatever educational opportunities the two sister cities of Guangzhou and Hong Kong could offer him. Little did young David know in 1947, as he transferee from the Lingnan University Medical School to the Faculty of Medicine at the University of Hong Kong, that forty five years on, he would be charged with the heavy but meaningful responsibility of not only setting Hong Kong's postgraduate medical education on an exciting course through the Hong Kong Academy of Medicine but also stimulating its research activities through the Research Grants Council.

David Todd has gone a long way in forty five years. He left a stalemated China which saw glimpses of a successful Communist challenge against the corrupt, capitalist Guomindang. As if destiny is catching up with him, our accomplished professor of medicine will need to work closely with our neighbors in the north in the years to come. As the likely President designate of the Academy of Medicine and Chairman of the research Grants Council, Professor Todd will indubitably engage the interested parties in discussions to ensure that Hong Kong’s tertiary education in general, and professional medical education in particular, will continue to serve the Hong Kong people who have been given the mandate to lead a capitalist life under the auspices of the socialist motherland.

Young David owed a great deal to the Presbyterian missionaries. His foster-father founded the famous Paul Todd Hospital on Guangzhou. Coming from a family of doctors, young David always wanted t be a medical practitioner. In the wake of Japan's invasion of China in 1937, he made his first exodus from war-stricken China. Hong Kong provided him and many others with refuge in the interim years until Christmas day in 1941, when World War II struck Hong Kong in the worst possible manner. In the interregnum, David Todd was given quality education and benefited from pastoral care in the Diocesan Boy's School. The Japanese occupation of Hong Kong induced David to be on the move again. At the tender age of 14, he was on his own, making his way through northern Guangdong which remained defiant of Japan's military might. While his schooling was unsettled and disjointed, he had the good fortune of being looked after by missionary friends who were closely connected with his foster parents. David Todd remembers well those yeas, be they resistance against an invading enemy or strive between the two rival political parties. Indelible are the memories that separated him from his foster family and those that caused him to witness the atrocities of the conqueror; the humiliation of the vanquished, and the loss of personal belongings inflicted by highway robbers.

To his peers and protégés alike, David Todd is the fair minded, selfless academician totally devoted to teaching, research and public service. He provides the role model for younger clinicians who benefit from his close to him, David is the facilitators who dose not impose his views and wishes on his colleagues but who provides pastoral care and secures resources as well as distributing them equitably. To a senor civil servant, he impresses the oligarchs as a meticulous and effective Chairman who gets thins done and, surprise, Surprise, makes hardly any enemies. In sum, he is Dr. Pauling and Mr. Serendipity. Professor Todd came first in all subjects in the Medical Faculty and obtained his M.B., B.S. in 1952. His brilliant academic record continued with the award of an M.D. in 1958 for his thesis on the Anemia of Cryptogenetic Splenomegaly. In 1966, he was elected Fellow of the Royal College of Physicians of Edinburgh. Amongst the many prized he won, the award of the Carl de Grouchy Medal of the Haematology Society of Australia in 1979 deserves special mention. In his capacity as internal examiner of candidates for the degree of doctor of medicine, David Todd holds the record of having examined thirty candidates in sixteen years, 4 of whom are serving chair professors, including the renowned 'emperor' of Oncology.

Our professor of medicine is one of the leading Haematologists in the region. His early work in conjunction with the late Professor A.J.S. McFadden dealt with spleen and liver diseases and changes in blood volume in particular. With the emergence of molecularbiology and human genetics as exciting fields of research in the early 1970s, David Todd embarked on new ventures in this area and never looked back. He is renowned for the systematic and methodical study of the demographic distribution, clinical features and molecular defects in Thalassemia in this part of the world. Thalassemia owes its origin to the Mediterranean Sea and denotes an inherited disease of the blood. Research into the molecular abnormality of the southern Chinese undertaken by Professor Todd and his colleagues has extended the understanding of Thalassemia to blood disease that is commonly found in the South China Sea region. His research term specializes in work on the analysis of mutation as a direct way of detecting genetic defects and in the diagnosis and treatment of Thalassema. The Department excels in the study of malignant haematologial disease, namely Leukaemia and Lymphoma, and his publications appear regularly in leading journals such as Cancer, Blood and Haematological Oncology.

David Todd's record of public service is outstanding. It bespeaks the development of a Department of Medicine which excels in teaching, research and servicing; the planning of the Hong Kong Academy of Medicine; and his vision of a national health service to look after the health and welfare of the people of Hong Kong.

We are witnessing interesting times in the development o postgraduate medical education and health care. Hong Kong is fortunate to have secured the services of David Todd as the mid-wife to deliver the baby - the Hong Kong Academy of Medicine. Being bolstered by colleges, including the College of Medicine of which he is President, the Academy, when established, will co-ordinate and audit standards. It will be able to award specialist diplomas to fellows who will have received six years of supervised training in a specialty. Professor Todd emphasizes the significance of overseas examiners and much closer co-ordination with China and reiterates the need for practitioners to keep up with state-of-the-art development in order to offer the best health care service to the territory. As regards the Hospital Authority, which has started its work in managing public and subvented hospitals outside of the government structure, Professor Todd appreciates the advantages which include better hospital conditions and a better management and information system, but warns against the risk of inadequate resources and the danger that rising costs may eventually have to be borne by the consumers. His preference, therefore, is for a sound national health service to be over the horizon.

Under his leadership, the Department of Medicine has gone from strength to strength. It now boasts of a multitude of specialties including Haematology, Cardiology, Endocrinolgy, Gastroenterology, Hepatology, Neruology, Renal Medicine and others. The quantum leaps the department has achieved in a relatively short time would have made the late Professor McFadzean extremely proud.

For his distinguished public service, Professor David Todd was made officer of the Most Excellent Order of the British Empire in 1982 and Commander of the same Order in 1990. In recognition of his outstanding academic achievements and contribution to the medical profession, the Chinese University of Hong Kong conferred on him the Degree of Doctor of Science, honoris causa, in 1990.

Mr. Chancellor, we are proud that one of our own medical graduates has been honored by academician and the civil service alike for his contribution to tertiary education and the community. We are also confident that Professor Todd will continue with a sense of mission and vision to serve Hong Kong in the 1990s. Shakespeare in "All's well that ends well" talked of the seven ages of men where "one man in his time plays many parts". David Todd has certainly done this and, unlike Shakespeare’s model where the sixth age progresses to second childhood, not so for David Todd; instead, far from retiring from active service, our Professor of medicine is embarking on a second career as he responds to the urgent call of the territory to steer professional medical education on a steady course and to quote the Bard again. He is 'fell of wise saws and modern instances'. On the occasion of the University's 80th Anniversary celebration, it is most apt that we honour one of our sons. Mr. Chancellor, it is therefore my privilege and honor to present David Todd for the award of the Degree of Doctor of Science, honoris causa.