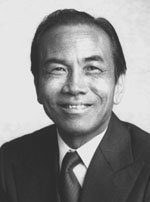 It is with particular pleasure that I introduce our second former graduate. For I have it on good authority that it was the wish of his father, a graduate of St John's, Shanghai that his son go north to the same university. One is tempted to speculate that if this plan had been carried out we would have been contemporaries and no doubt my knowledge of chemistry would have been very much better than it is today. But on second thought this would not have been so. It was the ambition of my father that I study medicine at the University of Hong Kong, and if circumstances had been otherwise we still would not have met. Those were troubled days, and in the event, we both stayed at home for the same reasons.

Professor Rayson Lisung Huang was born on September 1, 1920. He had a classical Chinese primary education and an Anglo-Chinese secondary education at Munsang College, a Christian school of which his father was headmaster. He entered this University in 1938 with a Hong Kong Government Scholarship and graduated in 1942 as one of our :war babies". During the occupation he escaped to China and, after teaching chemistry for two years, went to Oxford in 1944. After receiving a doctorate in 1947 he spent three years at the University of Chicago. While there he married Miss Grace Li, a graduate of St John's.

Numerous research papers on free radicals, sex hormones, and molecular rearrangements bear witness to his originality in science and his broad interests in chemistry. But one could not expect a man of Professor Huang's abilities to be left alone to enjoy the pleasure of the laboratory. He has been twice elected Dean of Science and on three occasions has acted as Vice-Chancellor of his University. He has been active on many committees and is currently a member of the Malayan Rubber Fund Board, Administrative Board of the Association of Southeast Asian Institutions of Higher Learning, and Chairman of the Specialist Committee on Science and Technology for Malaysia. He has maintained his connections with this University by acting as external examiner and visiting us on several occasions.

Mr Pro-Chancellor, Professor Huang has been awarded degrees of Doctor of Science from the University of Malaya and Oxford University. One would have hoped that an indulgent alma mater would have awarded him an LLD in order to lend variety to what will now become a monotonously long list of D.Sc's. But the decision was not mine and I now request you, Mr Pro-Chancellor, to confer upon Professor Rayson Lisung Huang the degree of Doctor of Science honoris causa.