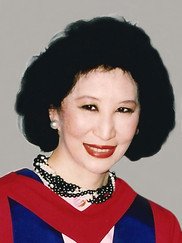 Born in Hong Kong in 1940 of refugee parents from China and educated locally and at the University of Calfornia at Berkeley, Baroness Dunn’s business career with the Swire Group has led her to directorships of John Swire and Sons (HK) Ltd, Swire Pacific Ltd, and Cathay Pacific Airways. She was the first woman to become a director of the Hong Kong and Shanghai Bank.

Baroness Dunn became a member of the Legislative Council in 1976 and is now the senior member of the Executive Council. She holds numerous public appointments, including the Chairmanship of the Trade Development Council – a role which has taken her on many missions abroad to promote Hong Kong and its products. In this capacity her wide experience in the textile and clothing industry and her firm stand against protectionism have won her the respect of business communities both in Hong Kong and abroad.

She was also director of the Mass Transit Railway Corporation from 1979 to 1985 and served as the Chairman of the Prince Philip Dental Hospital from 1981 to 1987, during the formative years of the University’s Faculty of Dentistry.

Baroness Dunn last year became the first ethnic Chinese and the first woman from Hong Kong to be given a life peerage in the Queen’s Birthday Honours List. The peerage not only bestows upon her the right to sit in the House of Lords, but, as she herself acknowledges, a special responsibility to speak on behalf of Hong Kong in matters which are of special interest to the Territory. The life peerage followed her earlier appointment as Hong Kong’s first ever Dame Commander of the Most Excellent Order of the British Empire (DBE), an award made in respect of her long years of service on the Executive and Legislative Councils dedicated to championing many causes of public importance. Among the international recognitions accorded to her work Baroness Dunn received the Prime Minister of Japan’s Trade Award in 1987.

The honorary degree of Doctor of Laws is conferred on Baroness Dunn in recognition of her service to the community and commerce.