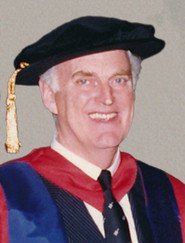 It is somewhat daunting duty to reply on behalf of my fellow honorary graduates and I know that all three of them join me in recognizing the very real honour that has been bestowed upon us, and in thanking you and the University for this honour. Beyond this I can only speak for myself - the more so because my fellow graduates are all distinguished academics, and I am only too aware of the precarious positions in which I find myself when addressing this audience as a Doctor of Laws, albeit honorary.

My brother, Adrian - because of his involvement with flying - was not long ago appointed Honorary Air Commodore. Unfortunately, our family motto - indeed the motto of the firm is - Esse Quam Videri - To be rather than to seem to be - an injunction which hitherto we have attempted to follow, and it is, therefore, with considerable apprehension that recently we have been practicing greeting each other with 'Good morning Air Commodore' 'Good morning Doctor Swire'

It was with the same sense of unease that I listened to the Public Orator. At my old University of Oxford they are merciful to those they are honouring and the Public Orator on these occasions addresses the congregation in Latin. I therefore clutched eagerly at a straw when Professor Davies told me that his first language was Walsh, in the forlorn hope that he could persuaded to address us in that ancient and mellifluous tongue. But it had, - alas - to be in English, a language which we all understand, and it is about that that I would like to speak this evening. As you have heard, my firm was involved at the birth - indeed perhaps the conception - of this University and on the Opening Day, March 12, 1912, the Governor announced our initial endowment. This was used to set up the Taikoo Chair in Engineering, still flourishing today, and our subsequent support, until quite recently, has followed this essentially practical course. In a sense it was the Spirit of Meiji that was still dormant - the acceptance by the East of the need to learn modern technology from the West. There was, I think, in China - even in Hong Kong then - no sense of belonging to one world.

Indeed for most Chinese China was the world, and what lay beyond its borders only had value as a source of useful technology. Many Chinese may still think like this, but the reality is different, and this is understood in Peking. In April 1987 I had the privilege of being received by Zhao Ziyang - Prime Minister at the time - and he was at great pains to impress upon us that the value of Hong Kong to China - Indeed its whole importance - depended upon its remaining an international centre where firms such as our own could flourish. In this way, Hong Kong would remain not only a window on the outside world, but also as a catalyst to enable China to play the world role to which it was entitled.

And for this English is vital, because it is the thread that holds together the one world that in so many ways - certainly in business, but in academia and foreign relations too - this planet has become.

Now I believe that in Hong Kong generally, perhaps even in this University, the standard of English is slipping. There are more people speaking it, but fewer - in proportion to the numbers required - who have real mastery of the language. It was certainly - and understandably - striking how much more articulate in English were those undergraduates applicants for careers with us whom I met last month in North America and England than are most of their contemporaries here in Hong Kong. I suppose nowadays few of the undergraduates, even at this University, have many English books in their homes - there may well not be room for them - nor does the use of English come naturally to them and their families. But English is the key to the outside world, and hence in great measure the value of Hong Kong to China depends upon it.

I know this is recognized - indeed I have heard something of the debate as to how best this problem can be addressed whether by a Foundation Year at University or by more emphasis on the effective teaching of English at school and we, as a firm, have taken part in what I believe has become known as the Language Campaign Committee set up by various Business Houses to make preliminary examination of how this demand can best be met. Certainly, as a firm we will be happy to be in the forefront of this, supporting whatever solution is finally decided upon. But I wonder if the difficulties and the urgency are fully appreciated? Command of English is - because of the long association with Britain - a priceless advantage that Hong Kong, together with Singapore, should have not only over its immediate competitors, but also in its future role as the catalyst, and indeed the dynamo, for the modernization of China. But it is an advantage which Hong Kong, I believe - more than Singapore - is throwing away. It is vital that this should not continue; we in the business world will, I hope, play our part, but the universities, schools and the government must take the lead.

Finally, on a softer note, may I as a humble M.A. from Oxford and not as a resplendent Honorary Doctor of Laws, put in a plea for the arts? We do not, in our firm, believe that it matters very much what is the subject of a man or woman's first degree, provided that the graduates concerned with confidence, humility - the two can march together - and enthusiasm are prepared to learn their jobs once set on a career. They must not be too specialist or out of touch with modern technology in their knowledge or they will, in many cases, find it hard to assimilate what is put before them; but I am saddened when I travel round the world to see advertisements for 'Business English'. I hope that there is no such thing, and that the English learn will enable those who want to, to escape as far as they wish into the wide world of English literature and knowledge available in the English tongue. Hong Kong is not just the concrete Capital of Mammon so often depicted in the press - even here there are opportunities for watching birds, or as Brian Morton has shown, fascinating discoveries to be made of the curious habits of creatures crawling round our coasts. There are increasing opportunities, too, for the enjoyment of music and the theatre and indeed of the whole world of human activity.

Hong Kong is crowded and cramped and many, perhaps most, people live in a way that limits their activities at home. But there is a room for a book. Not everyone will want to explore Regency vicarages with Jane Austen, or pent up passions on the Yorkshire fells with the Brontes, but there is something in English for everyone, so let us ensure - and not only for business and political reasons, vital for Hong Kong's life thought these are - that's somehow English, and good English, is available to all who have need of it.