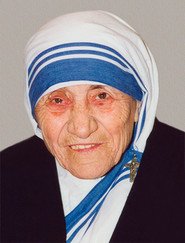 Agnes Gonxha Bojaxhi sees herself as a carrier of God's love. As Mother Superior of the Missionaries of Charity, the aim of which is to "quench the thirst of Jesus", Mother Teresa goes from strength to strength in caring for the dying and the destitute. Her compassion for the poor encompasses the staunch belief that they are a hope of the world because of their courage.

Being influenced by a Croatian Jesuit in her home town of Skopje, Albania, Agnes Bojaxhi decided at the tender age of eighteen to be a missionary by joining the Loreto Order. In Darjeeling, her first outpost, she was known to be a "sincere and religious novice". Seventeen years later in 1946, our carrier of God's love encountered her "Damascus Road" near Darjeeling when the Call came. She was to live and work with the poor and the natural place chosen was Calcutta. Rudyard Kipling described Calcutta as "London of the East", but the same author also characterised it as "the City of dreadful night".

Mother Teresa loves India and India adores her. Since her arrival in Calcutta in 1946, the city has been plagued by destruction, ignorance, class prejudice and religious strikes. In the midst of the poor and the zealous, Mother Teresa stands out as Bharat Ratna, or the Jewel of India, as the Indian Government so honors her. In the slums of Calcutta, the Missionary of Charity establishes homes and orphanages for the unwanted, the homeless and for crippled and mentally-retarded children. Clinics for the malnourished and rehabilitation centres for lepers, drug addicts and alcoholics set the example for sisters of the Order all over the world to follow.

Mother Teresa sees Christ in every person as she attends to the dying and the abandoned. Her mission is to quench the thirst of Jesus as she gives individual attention to all for whom she cares. In recognition of her work, the French have coined the word "Mouroir" to describe the last refuge of dignity where the dying can be comforted. Her love for India succeeds in breaking barriers across class and religious boundaries. Support for her order comes from all stratas of society and from Moslems and Hindus alike. Mother Teresa's tolerance for religions has made her see the value not so much in converting the unbeliever but rather in making people better Moslems and Hindus.

In the recent religious disturbances in Calcutta, Mother Teresa and her sisters were confronted by a group of armed fanatics. Realising that it was the "Mother" that they were up against, the group touched her feet and her forehead as a sign of receiving blessings from the Reverend Mother and then disappeared. She is truly Bharat Ki Suputri, that is, the great daughter of India.

One of Mother Teresa's celebrated triumphs is the conversion of Macolm Muggeridge, who with his corrosive humour and cynical wit, found inspiration in her. The encounter was through the production of "Something Beautiful for God". Muggeridge's misdi-rected compassion for sterilisation, abortion and euthanasia was reoriented toward profound admiration for her caring of the unwanted, the derelict and the dying. Muggeridge died a Roman Catholic.

Mr Pro-Chancellor, the Missionary of Charity is now over 3,000 strong and operates more than 400 branches all over the world. Its activities now extend to the caring of AIDS patients in Washington and New York. Ten convents have recently been established in Russia whilst five sprang up in Albania, the Mother Superior's native country, where she helped Moslems by urging the government to build mosques for them.

World recognition of Mother Teresa's noble cause came in 1975 when she was awarded the First Albert Schwietzer International Prize for "reverence for life", and again in 1979 when the Nobel Prize for Peace was bestowed on her. In 1983, Queen Elizabeth II met her in Delhi and presented to her with the Insignia of the Honorary Order of Merit. The world seems a small place to her as she always avails herself in the forefront, helping the helpless and the needy when catastrophes strike, be they cyclones in Bangladesh, earthquakes in Mexico, or gas leaks in Bhagalpura.

Mr Pro-Chancellor, I present to you Mother Teresa, whom the world recognises as a carrier of love and guardian of human dignity, for the award of the Degree of Doctor of Social Sciences honoris causa.