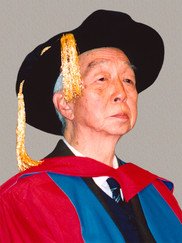 Apart from a sabbatical lasting ten years in confinement during the Cultural Revolution, Yang Xianyi has been immersing himself in a world where the mastery of languages and literary skills have brought joy to readers who become intoxicated with Greek mythology, Chinese political treatises and hua-pen short stories, English comedy and French poetry.

On turning twenty-one in 1936, Yang Xianyi left his relatively sheltered life in Tianjin to study English Literature under Edmund Blunden and Classics under Robert Levins at Merton College, Oxford. He was spared the opportunity by the inimitable Blunden to play cricket in the garden, although the latter did buy him the occasional beer at the Bear in Blue Boar Lane. The Resistance War against Japan was three years old when our Classics scholar returned to China in 1940, newly armed with the aura of Oxbridge and having fallen in love with Gladys Tayler, who for forty two years has been his literary comrade-in-arms and endeared wife. His credentials were put to good use by the wartime government as well as the new Republic when he served as an academic and researcher, and was appointed Vice-Secretary-General of the Nanjing People's Political Consultative Conference in 1950.

For over fourteen years until the Cultural Revolution, Yang Xianyi, like a latter day apostle touched by tongues of fire, spoke many languages, and translated into Chinese a cascade of literary work. This ranged from Homer's phenomenal Odyssey, through Aristophanes' The Birds, Virgil's Eclogues and the Chanson de Roland, to Bernard Shaw's Pygmalion. All these, by the by, were considered to be 'private enterprise', because his posting in the Foreign Languages Bureau required him to concentrate on translating Chinese work into foreign languages.

The Yangs must have been burning their midnight oil incessantly as topping the long inventory of work are Sima Qian's Records of the Historian, Sima Guang's The Mirror of Governance, Qu Yuan's Li Sao, Cao Xueqin's A Dream of the Red Mansions, and Lu Xun's Selected Works. One cannot help marvel at our Professor's dexterity and tenacity as he translated Homer's Odyssey in one and half years. At the same time, the Yangs found translation of the romantic classic, A Dream of the Red Mansions, heavy going. It took them up to 5 years to complete the work.

Yang is equally adept in translating hua-pen stories of the Sung and Ming Dynasties which were transcribed from oral narrations. He believes that they transmit great realism and truthfulness to life and reflect the social condition of the time. For example, the classic work, The Courtesan's Jewel Box, which related the love story of how the ungrateful scholar Li caused his lover, Courtesan Decima, to commit suicide after she threw her jewel box into the river. The box contained treasures which might have bought their way to being accepted by the scholar's snobbish family. Our translator's mastery of the spirit of the story is reflected in the following passage :

'Those who never loved had best be silent; It is no easy thing to know love's worth; And none but he who treasures constancy Deserves the name of love on this earth.'

Like many other intellectuals, the Yangs were given a new lease of life when China put the Four Modernisations into practice. The early 1980s were a welcome relief from the bitterness and helplessness the intelligentsia experienced during the Cultural Revolution when the Yangs were subjected to solitary confinement and unfounded accusations. Academic tours and visitations to Europe, the United States, Australia, Japan and India exposed their ingenuity and literary achievement to an ever attentive audience. Yang Xianyi is truly China's Ambassador Extraordinary. It must have been a moving experience when his alma mater offered him a Visiting Fellowship in 1984.

In accepting an honorary fellowship from the Hong Kong Translators' Association in 1986, Professor Yang stressed the importance of translation in promoting understanding and friendship between China and the West. No doubt, he will cast a watchful eye on the full implementation of bilingualism in Hong Kong in the 1990s.

Mr. Pro-Chancellor, few, if any intellectuals from China, have demonstrated their literary prowess in the same way that our master translator has radiated his brilliance. I am most pleased to present to you Yang Xianyi for the award of the Degree of Doctor of Letters, honoris causa.