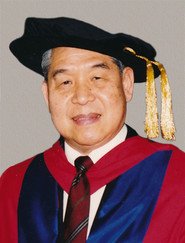 Alex Wu Shu Chih's childhood and adolescent days were intertwined with vivid and often precarious experiences of war and revolution. He recalls his mandarin father being visited by Mao Zedong's revolutionary vanguard during the Autumn Harvest Uprising in 1927. Fortunately for Hong Kong, the Wu family was spared. As an undergraduate in Kunming, Alex Wu went to classes with the children of the local warlord. The cardinal survival rule then was that, under no circumstances, should one overtake the car belonging to the warlord. His father was a government official and this gave Alex the opportunity to be fluent in six dialects and to savor the academic subjects that he really liked. After sojourns in Shanghai, Hong Kong and Kunming pursuing studies in marine science and mechanical engineering, fate steered young Alex on a course he truly loves. At the National Southwest Associated University in Kunming, which was out of the reach of the invading Japanese, he started out as an engineering student. However, his mastery of local dialects earned him a job as convoy officer. His duty was to accompany the convoy of strategic goods on the precipitous Bruma road between Kunming and Chungking. To do the job and study engineering would have been impossible. Studying languages and literature was another matter! Little did Alex know then that service to his country as a convoy officer also set him on a path that he never regrets - a love for languages and the arts.

Post-war Hong Kong provided refuge for many and Alex Wu was no exception. He established himself in a printing business which was closely linked to education and he is now Vice-Chairman of Dai Nippon Printing Company (H.K.) Ltd. and director of many utility companies.

It is in the arts, health and welfare, particularly youth welfare, and Chinese languages that Alex Wu has contributed significantly to making Hong Kong a better place in which to live. He takes pride in the introduction to the Legislative Council (LEGCO) of the concept of a Hospital Authority and the need for an International Exhibition Centre modeled after the Dallas Trade Mart in Texas. For his dedication to public services, Alex Wu was made Officer of the Most Excellent Order of the British Empire in 1973. He had by then sat on major public bodies, including the Hong Kong Trade Development Council and the Social Welfare Advisory Committee. From 1975 to 1988, he was an appointed member of the Legislative Council. Unlike the democratized Legco of the 1990s, the law-making institution in the 1970s often functioned on patronage and frequently yielded fruitful results. His career on Legco began when the then Sir Murray Maclehose invited him to lunch to discuss the cultural scene, only for Alex to discover later that he was being auditioned by the Colonial Secretary on suitability for membership of Legco. He obviously passed this test with flying colours. Alex Wu was a kind of radical although he followed all the rules. He was burning with reformist zeal and believed that Unofficial Members had the expertise and should be given the opportunity it sit side by side with civil servants on major committees and advisory bodies. The system as it existed then did not allow for Government policies to be openly monitored by the public or to work as efficiently as those in the private sector. That was in October 1976. The Legco now has panels advising the Administration major issues. Alex Wu was therefore a bit of a prophet. But to some of his peers in the 1970s, he was considered to radical. Sixteen years on, he must have found great comfort in the recent decree from the senior Chinese Statesman (and I quote): 'Those standing in the way of reform must step down'.

Mr. Chancellor, your predecessor, the late Sir Edward Youde, highlighted the promotion of the arts and the Chinese Languages as Alex Wu's major contribution to Hong Kong. Our patron of the arts observes that young people in Hong Kong tend to be technologically competent but culturally inept. He truly believes in the Italian motto – 'Non sorvive di solo pane' (man does not live by bread alone). He fought for the establishment of an Academy for the Performing Arts. Funding for the building was generously provided by the Royal Hong Kong Jockey Club and the Government was responsible for releasing land and providing the recurrent expenditure. The Academy is definitely not a Rolls Royce, an MG perhaps, but it has served Hong Kong well in educating our young people to be well versed in Music, Drama, Dance and Technical Art. As mid-wife for the Academy, Alex Wu speaks with a sense of pride that it is now seeking degree accreditation from the Hong Kong Council for Academic Accreditation.

From the arts to tertiary and continuing professional education, Alex Wu applied himself diligently to working for Hong Kong. He served as a member of the Universities and Polytechnic Grants Committee (UPGC), including membership on the Medical Sub-Committee, and was Deputy Chairman of the Vocational training Council. He remembers well how he introduced state-of-the-art management skills training to Hong Kong in 1960. As Chairman of the Hong Kong Junior Chamber of Commerce, he persuaded tow Harvard Professors who were conducting seminar in the Philippines to make a brief visit to Hong Kong. This resulted in probably the first high-powered intensive seminar series modeled after the case study approach of the Harvard Business School. He has vivid memories of the First session held in the cloister of University Hall at Pokfulam. Participants included two future knights and industrialists who went on to make their mark in the banking and manufacturing sectors.

In the UPGC, Alex Wu found natural allies in members who saw the importance of developing fine arts as an essential balancing act in any comprehensive curriculum. The then Dean of Arts at the University of Hong Kong remembers well Alex's enthusiastic support for Music and Fine Arts in the late 1970s. As early as 1977 he impressed on the Government at an Arts Council or Cultural Council should be established to co-ordinate cultural activities. We still await this further development.

Not all that Alex touched turned into gold. He speaks with some sadness about the Chinese language campaign. As Chairman of the Working Party on the development of a Chinese language Foundation in 1982, he made recommendations which would have raised the standard of Chinese language amounts our school children. These included funding provisions; policies on the publication of Chinese textbooks and the wider use of Putonghua in public meetings. Ten years on, the development of the Chinese language campaign is still unsatisfactory. He continues to urge that there should be a clear definition of norms for standard Chinese and an improvement in the use of the language in Chinese newspaper. For his contribution to the community, Alex Wu was made Commander of the Most Excellent Order of the British Empire in 1983. It came as no surprise that his services were once more required early this year, when the reorganization of the Stock Exchange Council made room for the election of new oligarchs. He was returned as second vice-chairman of the Council at a time when greater representation by brokers on the Council need to be balanced by closer monitoring by the Securities and Futures Commission. The globalization of the Hong Kong market and the introduction of new financial products are some of the tasks that Alex Wu and his colleagues will have to tackle. Rest assured that he will soldier on to conquer a few more hill tops. At the mature age of 72, he has done a great deal for Hong Kong and will continue to be his vibrant, enthusiastic self, looking for niches where something good can be achieved, be they the arts or better prospects for the territory.

Mr. Chancellor, the University now wishes to recognize his longstanding and continuing contribution to Hong Kong in the arts and education and his indefatigable and pioneering spirit. It is therefore my greatest pleasure to present to you Alex Wu Shu Chih for the award of the Degree of Doctor of Laws, honoris causa.