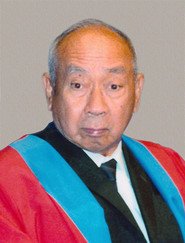 Revered as the architect of Singapore's successful economic development since independence in 1965, Goh Keng Swee received a rigorous education at the London School of Economics where he was awarded the Doctor of Philosophy Degree in 1952 and made an Honorary Fellow in 1966. At the same time, he had already begun a career as politician and practising economist, being Vice-Chairman of the People's Action Party and Minister of Finance when Singapore began its experimentation with self-determination. After serving as Minister in the Defence and Education portfolios, he was appointed First Deputy Prime Minister from 1973 to 1984.

It has been said that the twenty-first century will be the Pacific century. Singapore, as one of the four newly industrialised nations, will continue to contribute to that rapid growth which places the Asia-Pacific in the forefront of the global economy. In 1960, Singapore's per-capita gross national product was US$400. Today it is US$14,000. The explanation of this phenomenal success can be found in the preface to the Economics of Modernisation and Other Essays which Goh Keng Swee published in 1972: 'If our experience can be used as a general guide to policy in other developing nations, the lesson is that the free enterprise system, correctly maintained and adroitly handled, can serve as a powerful and versatile instrument of economic growth.'

Goh's disdain for economic planning is overwhelming,and I quote: 'Planning as we know it has a limited value. Economic policy is more important'; or again: 'and so in the name of socialism, equality and justice, millions are denied the escape from age-old poverty which rapid economic growth can provide'.

But what is Singapore's economic policy? Is there a panacea for economic development in the Third World?

In the first place, Goh Keng Swee does not believe that the prescriptive power of growth models for developing countries are relevant to Singapore. In his celebrated exposition on "Some Unresolved Problems of Economic Growth' which examines the provision of a solution to contemporary growth problems, he remarks that 'the Keynesians get a wooden spoon where the rich countries are concerned and that Arthur Lewis' continuous capital accumulation model gets fair grade where the poor countries are concerned.

For Singapore, Goh Keng Swee identified six principle measures to encourage new industrial development. They are: provision of infrastructure, tariff protection, fiscal incentives, supply of trained labour, maintenance of industrial peace and wage stability, and encouragement of savings. He was among the few broad-minded economists in the 1970s who agreed with Gunnar Myrdal's monumental Asian Drama which made the most thorough study of non-economic factors affecting economic growth. To his regret, Goh finds that the economist does stand fast by his principle of doctrinal purity without due regard for non-economic phenomena.

The foreign direct investment that flowed into Singapore as a result of measures undertaken by Goh Keng Swee later led to the advocacy that multinational companies were a substitute for entrepreneurship as a vehicle for growth of manufactured exports. This proposition now finds validity in the manufactured exports of Malaysia and Thailand in recent years.

Since his retirement from politics, our elder statesman has been very much sought after. He served as economic advisor to China's State Council on coastal development and tourism and until recently he was Deputy Chairmanof the Monetary authority of Singapore. Currently, he is advisor to Kissinger Associates in New York and the NEC Corporation in Tokyo.

In the inculcation of regional economic development, Goh Keng Swee has been advocating the narticioation of multinational and foreign investors in ASEAN states, especially in the development of natural resources, production for the domestic market and export-oriented manufactures. In recognition of this contribution to regional co-operation, the Government of the Philippines bestowed on him in 1972 the Order of Sikatuna and the Ramon Magsaysay Award. In 1985, the Singapore Government honoured him with the Order of Temasek (First Class).

As a practitioner, Goh Keng Swee uses economic theory only to the extent that he finds it useful in comprehending the problem at hand. To him, experience is a harsh school in which there are no alibis for failure. And yet, a leading development economist finds his work full of wisdom and unsurpassed as acute and realistic analyses of problems of economic development in Asian countries.

Mr. Pro-Chancellor, as a practitioner of economics and a statesman, Goh Keng Swee has contributed a great deal to Singapore's well-being and prosperity. His wisdom in analysing economic development has also benefited nations in the region. It gives me great pleasure to present to you Goh Keng Swee for the award of the Degree of Doctor of Letters, honoris causa.