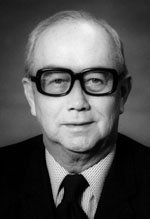 Mr. Chancellor, I present to you Samuel Victor Gittins, Queen's Counsel, Justice of the Peace, for the award of the degree of Doctor of Laws. Unlike so many, Samuel Gittins did not come to Hong Kong: he is a true belonger and this is his birth place, born as he was while Lugard was Chancellor and Governor. He is, therefore, a citizen of our city and a product both of Diocesan Boys' School and Hong Kong University - a classical Hong Kong education.

In those far-off days Hong Kong was no more than a village, and Mr. Gittins recalls the Sunday afternoon picnic trips along the rough unmade path, later to become Prince Edward Road. These were the days of May, Stubbs and Clementi, and Finnigan ensconced as University Registrar in a tiny one man pre-bureaucracy.

Our graduate of almost half a century ago, was a King Edward VII scholar, and of especial note was his prowess in athletics (in 1929 he was the University's half-mile and mile champion) as well as being a formidable cricketer and champion swimmer who represented Hong Kong. For the next six years after leaving the University, he took a position with the Manufacturers' Life Insurance Co. The lure of the academic world was not to be resisted, however, and he found his way in the year 1936 to Oxford, and to Oriel College, to read at the Oxford Honour School of Jurisprudence.

At Oxford he interspersed his learning of the law with high calibre sport, gaining half blues in both swimming and waterpolo. At Oxford too, he remembers a number of luminaries, John Plamenatz (later professor of political theory) and Leonard Cheshire, V.C., both being in his year.

Following Oxford, he served in Singapore, Hong Kong and India, and the outbreak of war took him into the Intelligence Corps. He held a number of responsible posts in the Wuchow-Shanghai area (an area, so I gather, Mr. Chancellor, which is well known to yourself). Colonel Gittins once more returned to his studies, where at the age of 37 he entered Inner Temple.

Within three years, however, Mr. Chancellor, he was back in Hong Kong having in the meantime served organizations like the British Council and the Ministry of Civil Aviation. The Hong Kong Bar admitted him almost immediately in two senses, firstly to its membership and, almost instantaneously, as its Secretary. At the same time he threw his formidable sporting talents on to the cricket field, captaining Kowloon Cricket Club from 1954 to 1956. From 1960 on he began to make an impressive mark on Hong Kong's legal scene. He was made a J.P., and Chairman of the Land Resumption Board and of the Board of the Inland Revenue. He was appointed Chairman of the Hong Kong Bar and in 1967 took silk. Even today, he is one of only eight Q.C.'s.

We, at the University, Mr. Chancellor, feel that such a remarkable and eventful career might merit our own best honours. Yet added to this is a whole range of tasks mainly 'back-room'. He saw clearly the need in Hong Kong for legal education and for the future provision of lawyers, hence in 1966, he accepted an invitation to join the Chief Justice's Working Party on Legal Education; this came at the very moment when the demands made upon his time were at their height. With characteristic generosity he gave himself unstintingly to the unheralded but necessary task of helping in the planning of the teaching of law at Hong Kong University. Together with a number of others, he may be described in full measure as a midwife of the law department. To pursue the metaphor, the department produces the raw material for twins, at least until the profession itself decides on unification.

At the same time, Mr. Chancellor, the Queen's Counsel provided wise Counsel on a multiplicity of University bodies. At the upper echelons of University government he bravely entered into a veritable thicket of University Committees -Court, Council, Finance Committee, Terms of Service Committee, to name but a few. On six occasions he has been the University's Acting Treasurer - a difficult position indeed, for the operations of University finance are such to suggest the beads on a string - when one slips off the rest follow.

The business of a university, Mr. Chancellor, is education, but more particularly it is types of education. A legal training offers a double challenge: in the first place it offers some perception into what is a most explicit, institutionalized and complex mode of regulating human conduct. In the second place it teaches the learners how to apply both their knowledge and techniques in the market place as it were. Woodrow Wilson was once informed that it took you twenty years to recover from a legal training. To become a good lawyer he should have come to us.

Lawyers are, themselves, their own severest critics. Sir Dingwall Bateson, President of the Law Society, once asserted that 'a solicitor is a man who calls in a person he doesn't know, to sign a contract he hasn't seen, to buy property he doesn't want, with money he hasn't got'. The struggles of the barrister in court on the other hand, have been likened to an art which seeks to extract from an adversary any 'untruths' as it were ... in their correct order.

The seas on which sails the ship of jurisprudence like those of government itself, are sometimes calm, sometimes choppy, sometimes even mountainous. We, in Hong Kong University and in particular, in our energetic and enthusiastic law department will produce the future legal navigators to conduct many of our citizens through the storms of contention and litigation which is of the essence of a free society.

The credit and the foresight for much of what has been achieved belongs with Mr. Giitins. Yet, he has a number of roles outside the University. He has worked in very many bodies including more recently the Corruption Prevention Advisory Committee and he catered for it in his own sensible manner.

For his services to the University as an alumnus of distinction, and to his efforts towards the creation of an authentic legal presence in Hong Kong, for his extensive public service, we make the University's most tangible offer of thanks in asking you, Mr. Chancellor, to confer on Samuel Victor Gittins the degree of Doctor of Laws honoris causa.