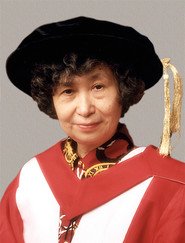 Mr Chancellor, you may be surprised that our matriarch of Medicine enrolled as a medical student more by force of circumstances than by choice. Having had only several years of formal education because of the Pacific War, Rosie Young Tse Tse thought she would be disadvantaged if she chose a discipline that would require either laboratory skills or a strong language base. Having come third in the matriculation examination with high achievements in Mathematics, she believed she would remain competitive if she studied Medicine as it was not related to the curriculum in the schools. In her long and distinguished career, our Professor of Medicine had three major calls to serve the University and the community, on each occasion of which, she was the right person at the right time. On graduation, the opportunity to embark on research came as Professor Alec MacFadzean, the Scottish patriarch of Medicine, took on aspiring clinicians for training. It was MacFadzean that launched Rosie Young into becoming a world ranking researcher. The second call in the 1980s was a digression from research when she discovered her administrative talents as Dean of Medicine and Pro-Vice-Chancellor. There is some truth in what the Analects says: “The student, having completed his learning, should apply himself to being an officer”. Although our modest but rigorous clinician did not wish to turn herself into a full time government official, she responded readily to the call to chair the Hong Kong Medical Council and the Education Commission in the late 1980s and the early 1990s. For her service to Hong Kong, she was made an Officer of the Order of the British Empire (OBE) in 1987.

Rosie Young has scored quite a few firsts in her career as researcher and administrator. Being the first from Hong Kong to qualify for Membership of the Royal College of Physicians in London and Edinburgh was a milestone that she still enjoys reminiscing about. But undertaking research is not without its professional hazards. When busily obtaining blood samples from a patient, our diminutive Professor was hit solidly on the head by her mentally confused research subject. Probably she was fully compensated by the publication of numerous papers on thyrotoxicosis. Rosie Young became the first in the world to identify the frequent occurrence of periodic paralysis amongst thyrotoxic patients and describe the abnormality caused by the membranes permeability to sodium and potassium ions. Appropriate treatment after early diagnosis may save the patient from cardiac arrhythmias induced by hypokalaemia. Similarly, in her research on primary carcinoma, it was found that low blood sugar content caused by insulin-like substances from tumours were responsible for hypoglycaemia. Frequent feeding or parenteral glucose infusion may relieve the symptom and improve quality of life for the patients.

Our endocrinologist believes that Medicine is both a science and an art. As the patient is the most important person in the hospital, all good doctors must be able to communicate well as professionals with patients and remain truthful to the Hippocratic Oath. As Chairman of the Hong Kong Medical Council she feels gratified that issues like fitness to practice, doctor’s accountability to patients, universal licentiate examinations and registers for specialists are high on the Council’s agenda. Being an educationist herself, professor Young has found work as Chairman of the Education commission most challenging as she continues to grapple with many outstanding problems, amongst which the language of instruction issue remains one that needs both a good diagnosis and a cure from our revered clinician. Mr Chancellor, Rosie Young Tse Tse attributes her trials, tribulations and triumphs to the ability to strive in adversity. Her enthusiasm for public service has been spurred on by the spirit to redress social injustices and she finds inspiration from the writings of Alexander Solzhenitsyn, C P Snow and Charles Dickens. It is my great pleasure to present to you Rosie Young Tse Tse for the conferment of the Degree of Doctor of Science honoris causa.