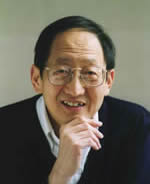 Here is a man who has personified many uniquely Hong Kong phenomena. Like most of his generation currently living in Hong Kong, Professor Daniel Tsui Chee was born in rural China, in the province of Henan, and moved to the then fledgling colony as part of the massive post-war migration wave in search of better opportunities. He was sent here by his parents to receive what he later described as an "outstanding" secondary education. After graduating from Pui Ching Middle School, he was admitted to read medicine at National Taiwan University but instead opted to enrol in a matriculation programme for students from Chinese-medium schools preparing for entry to this University. That plan was not to be however.

A scholarship offer from Augustana College brought Tsui to America. For many migrants such as Tsui, Hong Kong not only provided a solid foundation but also a springboard from which they could further their aspirations abroad. Tsui spent the next decade in the state of Illinois, during which he grew intellectually, spiritually and even romantically! It was at Augustana that he experienced the freedom to explore his Lutheran faith for the first time. Tsui was noted not only for his active service in the Christian fellowship on campus, but his ringing tenor voice could often be heard from the pews. As Augustine of Hippo said, Qui cantat, bis orat ("when you sing, you pray twice"). Intellectually, following the footsteps of the 1957 Chinese Nobel laureates Yang Chen-Ning (楊振寧) and Lee Tsung-Dao (李政道), Tsui became a graduate student at the University of Chicago. While exploring the theoretical bases of solid state physics under the young Royal Stark's tutelage (who was only two years his senior), he also honed his technical skills, from drawing to soldering to metal works, and helped his mentor build up their new laboratory. Again we can appreciate our honorand's sense of industry and practicality where most graduate students would not have paid quite so much attention to the hands-on aspects of their studies. This was however so typical of Hong Kong migrants at the time whose very qualities collectively endowed our present success locally and in the diaspora.

But above all Tsui would tell you that his most significant achievement in Chicago was to have met his wife Linda Varland, while eating an ice cream sandwich! Together with daughters Aileen and Judith, they are a close-knit family. Our honorand has been particularly fond of sharing the 1978 film Days of Heaven by Terence Malick with his family. In Aileen's words, the juxtaposition of "the golden light and the flat fields of waving grasses of a visionary Midwest" in the movie against the "impoverished soil of Henan" in Tsui's memory in many ways characterised her father's life history. This melancholy blows away quickly as soon as Tsui thinks again of the idyllic Midwestern setting and relate it to the ideal Midwestern girl he is still so much in love with.

After Chicago, Tsui moved to Bell Laboratories and collaborated with Horst Störmer. Together they tested the limits of the "Hall effect", where an electric current passing through the long edge of a thin gold plate moves sideways if one applies a magnetic field perpendicular to the flat direction. By making the plate a sandwich structure of semiconductors, cooling the temperature to the very low sub-zero range and applying a huge magnetic field, not only does the Hall voltage change from a smooth line to a stepped or quantised effect but each step is split into three. This apparent breaking up of a single electron into thirds can be thought of as the electrons condensing into a new type of quantum fluid that is more rigid than a solid crystal state. The experimental pair turned into a triumvirate with Robert Laughlin who provided the theoretical explanation for what came to be known as the "fractional quantum Hall effect". For this insight, they were awarded the 1998 Nobel Prize in Physics. With characteristic humility, our honorand pleaded with the press corps on the morning of the announcement, "You must not take this too seriously – life goes on."

Nevertheless we witnessed the impact of his personal influence in the form of winding queues along Waterloo Road outside his alma mater, or more precisely its affiliated kindergarten, after the Nobel announcement. This was of course also a reflection of the same Confucian zeal of Hong Kong people in search of the best education for their children, just as Tsui's parents presciently arranged for him half a century ago.

In this year of 2007, on what would have been the 45th anniversary of Tsui's class of 1962 had his plan in attending HKU materialised, it is our privilege to finally welcome him into the Convocation as an alumnus. Mr Pro Chancellor, for his dedication to the principle of scientia gratia scientiae (science for the sake of science), I present to you Professor Daniel Tsui Chee, a Nobel Prizeman and at once a quintessential son of Hong Kong, for the honorary degree of Doctor of Science.