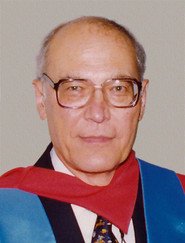 "A thing of beauty is a joy for ever,

Its beauty increases; it will never

So wrote John Keats. And this creed seems to have helped shape Sir Joseph Hotung's modus operandi. His love of beauty, enshrined particularly in the objects of Chinese antiquity, his generous donations to museums and galleries, his willingness to share the delight engendered by the sight of beautiful objects have enriched the lives of not just the people of Hong Kong but also those who dwell far beyond our shores. And possibly it is for his contribution towards enhancing the quality of life of the ordinary seeker after beauty that Sir Joseph is most widely known.

But, though this contribution may be reason enough, it is certainly not the only reason our University seeks to honour him. "Life is short and art is long". True enough, but life is real, life is earnest and the more mundane aspects of existence are important, too. Sir Joseph has also contributed in many other ways to the life of the community.

After graduation he worked as a security analyst for the Marine Midland Bank for a number of years. It was the deaths of his father and grandfather within the space of a little more than a year that brought Sir Joseph back to Hong Kong. In the 1960s Sir Joseph started his own business and was primarily involved in the development of commercial properties. Today he is Chairman and Managing Director of Guinness Investment Ltd and Ho Hung Hing Estates Ltd, both property and financial investment companies. His reputation as a successful businessman was established early: he has served on the Boards of public listed companies, including the Hong Kong and Shanghai Banking Corporation. He is currently on the Boards of HSBC Holdings plc and Hong Kong Electric Holdings Ltd.

Sir Joseph's involvement with community service and the field of art - and often the art and the community service overlap - began in the late 1970s and early 1980s. And it is in these activities, as a connoisseur, a collector and as a philanthropist that Sir Joseph has truly excelled and built a reputation and a legacy of beauty that is safe from the "razure" of "Times' s fell hand".

He took time out from his busy business schedule to serve on government boards such as the Inland Revenue Board of Review. At present he is a member of the Judicial Services Commission. He also has affiliations to scholarly bodies: he is a Director of the East Asian History of Science Foundation Ltd and Trustee of the Asia Society, New York. He has devoted a great deal of time and energy to the Arts Development Council, set up by the Government in 1994; Sir Joseph was appointed by the Governor as the first Chairman of the Council. The Council is tasked by its Ordinance to plan, promote and support the broad development of the arts with a view to improving the quality of life of the whole community. This mandate fits in with Sir Joseph's conviction that the arts - and this means not just the visual arts – play a centrally important role in the development of human potential, and he and the other members of the first council set the framework and guidelines for the future of the Council. Although Sir Joseph concluded his term as Chairman in the summer of 1996 he continues to be highly supportive of the Council's objectives and activities, and it is with the support of the Sir Joseph Hotung Fund that the Council has organised an International Symposium on the Arts and Education in Hong Kong to be held later this month. Sir Joseph sees "education through the arts and education in the arts as the key to personal growth and to opening doors to a broader and more sensitive perception of one's whole environment"; the arts are important to all, but in particular to our youth, for our youth is "our future".

It is this interest in the development of the young that has led him to accept our University's invitation to sit on our Council. He served as a member of the Terms of Service Committee and because of his background in finance he sat on the Finance Committee, on which he rendered sterling service, earning the admiration and eternal gratitude of our financial colleagues. Reliable report has it that Sir Joseph was discreet, astute, conscientious and cautious in helping shape the financial direction of the University at a crucial time. He gave unstintingly of his time and expertise. To him we are particularly beholden for the work he put in as Chairman of the Staff Terminal Benefits Scheme from 1987 to 1995; he was also one of the trustees for the scheme. This task, so essential for the well-being and security of all members of the University's staff, was onerous, and often thankless. Sir Joseph has also lent his business expertise and experience to the development of our School of Business and the Poon Kam Kai Institute of Management (1990-1996).

Sir Joseph is well-known for being low-key and averse to self-promotion. But as a model of a civic-minded humanitarian, Sir Joseph is no stranger to accolades and awards. He was made Knight Bachelor in 1993, and was the 1996 Montblanc de la Culture Award Winner. Our university, too, has tried to show our indebtedness by making him an Honorary Fellow of the University.

No account of Sir Joseph would be complete without more detailed reference to his interest in Chinese art. He became active in the field of art in the late 1970s and early 1980s, participating in the Oriental Ceramic Society of Hong Kong and sitting on its Committee for several years. He also became an avid collector of Chinese art, especially Chinese jades, porcelain, bronzes and Chinese Ming furniture. Because of his acknowledged expertise and interest in the field of Chinese art, Sir Joseph has been invited to serve on the committees of a number of major international museums such as the Metropolitan Museum of Art in New York and the Freer Gallery in Washington DC. He is also a Trustee of the British Museum. He has sponsored unforgettable exhibitions and made possible the construction of a number of galleries, including the magnificent Joseph E Hotung Gallery of Oriental Antiquities in the British Museum which opened in November 1992. One of the most recent beneficiaries of Sir Joseph's largesse is the internationally-acclaimed Shanghai Museum.

Sir Joseph has received international recognition for having, over a quarter of a century, put together one of the most important collections of jade in the world. The collection covers the full span of jade carving, from the Neolithic period to the Qing Dynasty. In 1995 a collection of three hundred pieces shown at the British Museum, belonging almost exclusively to Sir Joseph, gave the Western public a rare opportunity to see the complete range. With characteristic modesty Sir Joseph has said, "I just bought things if I liked them". "The excellence of the collection and its range testify to Sir Joseph's judgement and taste. No wonder leading experts on both sides of the Atlantic describe Sir Joseph as a "jade collector par excellence". For over 3,000 years jade has been seen by the Chinese as a symbol of all that is good, pure, noble and sublime. The ancients saw jade as embodying all the virtues of "a perfect gentleman". How fitting, then, that Sir Joseph should have such a close affinity with jade.

Mr Chancellor, in recognition of all that he has done for the arts and for society in general, I call upon you to confer on Sir Joseph Hotung the degree of Doctor of Letters honoris causa.