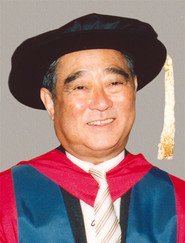 Konosuke Matsushita, founder of the Matsushita Electrical Industrial Company Ltd., is a true believer of a famous Japanese adage: ‘Keiei no kotsu kokonari to kizuita kachi wa hyakumanryo’. In English, it means ‘the knack for successful management is worth a million dollars’. This same proverb has inspired William Mong Man-wai for over four decades since the time that he started his own business in retailing Japanese electrical appliances with $10,000. He emulates Matsushita’s belief in strong leadership, growth through diversification, customer service and loyalty from employees.

As Chairman of the Shun Hing Group, William Mong now steers an empire that boasts of $10 billion turnover, half of which comes from the People’s Republic of China. The Group has seven subsidiaries dealing in electrical products, many of which are household names, ranging from ‘National’ rice cookers to ‘Panasonic’ T.V. sets, and from ‘JVC’ video-cameras to ‘Technics’ hi-fi systems. Like Matsushita, he believes that high quality and innovative products can make life more comfortable for the consumers.

Born and bred in Hong Kong, William Mong later underwent the turbulent years of the late 1940s in China, where he developed his compassion for the country and longed for political and economic stability. He saw the greatness of Shanghai and prophesies the return of its economic splendour in the twenty-first century. His business opportunity came in 1953 when his company became the sole agent in Hong Kong and Macao for ‘National’ products. To inculcate support from his supplier, William Mong did the unusual at the age of 22 by attending primary school in Japan for half a year, securing promotion at the pace of one grade a month. One wonders whether he had any problems physically fitting into the class. Our business ambassador has continued to work for the strengthening of Japan-Hong Kong and Japan-China relations as he serves on the Council of the Japan Society of Hong Kong. In 1988, he was awarded the Japanese Order of the Sacred Treasure, by the Emperor of Japan.

The Shun Hing Group is more than an agent for Japanese products. It has provided Matsushita with a rich testing ground. William Mong remembers the critical 1950s when Matsushita found it difficult to test his products as the Cold War and protectionism made it well-nigh impossible for Japanese, European and American products to compete in the same market. Hong Kong was the exception and Shun Hing supplied the Japanese with invaluable information on marketing quality assurance and customer behaviour.

In the 1990s, the Shun Hing Group continues to play a vital role for Matsushita in developing the potentially inexhaustible market in China. Although William Mong subscribes to Matsushita’s philosophy of ‘Not for Bread Alone’, he also draws a distinct line between unfailing loyalty and market forces. In order to retain quality staff, the Shun Hing Management provides good material incentives as well as professional training.

Our entrepreneur epitomizes the economic interdependence of Hong Kong, China and Japan. Mr. Chancellor, we need more people like William Mong to foster the ideals of the Asia-Pacific Economic Cooperation Forum.

‘Profit for profit’s sake’ is not the objective of the Shun Hing Group. Instead, the Shun Hing Education and Charity Fund was established to support welfare and higher education. Five tertiary institutions in Hong Kong have benefited from the substantial donations in the last three years. His community service extends to work for the Community Chest, Caritas and Jinan University in Guangzhou. Having served on the Consultative Committee for the Basic Law, William Mong remains confident of Hong Kong’s continuing success. His willingness to support human capital investment by making contributions to higher education is yet another assurance that the future of the territory is secure. Recently, The Hong Kong Polytechnic conferred on him an honorary doctorate in Business Administration. Closer to home, he has taken a keen interest in the affairs of our University. In celebrating its 80th Anniversary and setting strategic targets for the Ninth Decade, the University of Hong Kong has benefited from the Shun Hing chief’s advice and support.

Mr. Chancellor, it is my great pleasure to present to you William Mong Man-wai, a high achiever in business and a staunch advocate of tertiary education, for the award of the degree of Doctor of Laws, honoris causa.