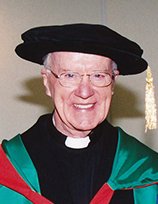 Born in 1927 in Mullagh, County Cavan in Ireland, Alfred Deignan came from a large family of thirdteen children. As a scholarship boy in the Jesuit mission school, he was asked by one of the Fathers what he would like to do when he grew up.

"I want to be a Jesuit priest", the young Alfred Deignan replied without hesitation. When he went home and told his mother what he said, she was surprised but understood and supported him. In 1945, he became a novice in the Society of Jesus. In 1947 he entered University College Dublin to read History, Irish, and English. After graduation, he studied philosophy until 1953 when the Society decided to send him abroad. With the same spontaneity which prompted his boyhood wish to become a priest, he said he wanted to go to Hong Kong. It would not be quite true to say that he never looked back, for he has always been true to his European and Irish roots. But transplanted to the shores of Asia, he has flourished for fifty years in his adoptive soil.

He arrived in August 1953; the heat, the humidity, and above all, the cultural differences of Hong Kong in the early 1950s both shocked and challenged him. For two years, he lived on Cheung Chau where he learned Cantonese, and experienced at first-hand the struggles of the villagers and boat-people against poverty and hostile natural conditions. But besides their need for help, he also saw and appreciated their inventiveness and resilience, an appreciation which developed, over the years, into strong bonds of affiliation with the young and old who came under his apostolic care. As Father Deignan, he is loved, respected, and revered by many in the Hong Kong community, past and present.

Those who met him in the early years remember him also as someone who could execute a mean pass on the soccer field when he played football for the Hong Kong Football Club. Mr Pro-Chancellor, it was also at this time that Father Deignan began his long association with Wah Yan College when he taught there after leaving Cheung Chau. In 1959, he was ordained into the priesthood and as he continued with his language studies, he acted as Socius to the Master of Novices.

Between 1962 and 1970, Father Deignan served Wah Yan College Hong Kong, first as Vice-Principal and then as Principal. During the years of his leadership, Wah Yan College became the nurturing ground of young men who not only excelled academically, but also received the holistic education that so well-prepared them for personal fulfilment and social distinction. Many now stand at the apex of Hong Kong society and some have achieved international renown. Father Deignan's achievements as teacher and educationist were equally evident at Wah Yan College Kowloon where he was Principal from 1978 to 1992.

In order to better help his students, Father Deignan took counselling courses at the Catholic Marriage Advisory Council. Armed with what he learnt and his frontline experience of working with young people, he devised courses on self-development and human relations which he offered not only in Wah Yan but also other Catholic schools. To each of his students who needed help, Father Deignan was a patient and sympathetic listener, and for each of them, he was not only confessor but also became confidant, someone in whom they placed their trust and whom they knew they could rely on in times of crisis or everyday disappointments. This experience in counselling he brought with him when he became Warden of Ricci Hall, the University's residence for male undergraduates, an office he held from 1970 to 1978. At the same time, he offered his spiritual advice as Chaplain and contributed as an active member of the Wardens' Committee, and President of the University's Social Service Group from 1972 to 1978. At the University, as in Wah Yan, he was mindful of rules but also gave students opportunities to be responsible, and through responsibility, to create change and improvement according to what they are capable of.

Inspired by his apostolic mission, Father Deignan's educational philosophy was grounded upon the firm belief that young people should have faith in themselves and in others. The need for a positive self-image was particularly urgent for some of his students from underprivileged backgrounds, and others suffering from abuse in the family or reacting against parental pressure to compete and succeed. His counsel to both teachers and students is to begin with self-reflection, and through this, to recognise their own good qualities, not in order to become complete in self-confidence, but to initiate the path to self-reform and better human relations.

Father Deignan's vision of educational reform exemplifies the twin vocations of the Society of Jesus, for teaching and for the welfare of the spirit. "Dialogue on Teaching as a Service", a programme for teachers which Father Deignan initiated in 1980, was followed, in 1993, by another programme, "Reflective Pedagogy" based on the Spiritual Exercises of St Ignatius Loyola. In 1986, the Characteristics of Jesuit Education was published by the Jesuits and in these two programmes and the printed work, Father Deignan mapped out for teachers the detailed process of reflection, preparation, sharing, and corporative learning. This is vocational training with a significant difference: rather than new pedagogical or presentation skills, teachers learn how to integrate ethical values into their periodical re-examination of themselves, their classroom experiences, and their care for the students’ well-being as individuals and social members.

Like the good and faithful servant, Father Deignan has tirelessly put his talent to use. Between 1992 and 1996, he was Assistant Secretary for Education in the Jesuit Conference of East Asia and Oceania, and from 1996 to 2002, Regional Superior of Jesuits in Hong Kong and Macau, and in 2003, Provincial Delegate for Hong Kong. Besides his work in the Catholic Church and in education, during this period, Father Deignan was member of the Hong Kong Advisory Council on Aids, member and Vice-Chairman of the Hong Kong Aids Foundation, member of the Council of the Aids Trust Fund, and Chairman, Expert Panel for HIV Infected Health Care Workers. In 1993, he received the Governor's Commendation for Community Service Award.

In 1997, together with a group of dedicated educationists in tertiary and secondary institutions, Father Deignan established the Hong Kong International Institute of Educational Leadership of which he is currently Chairman. The Institute's vision is "to foster a community which is fair, honest, just, caring, compassionate, responsible, trustworthy, generous and with courage; a community which lives in harmony and sets a high standard of moral behaviour". This statement crystallises Father Deignan's educational mission, and in the fulfilment of his mission over the past four decades, many in Hong Kong have learned from his example, and benefited from his constancy, dedication, and capacious sympathy. Mr Pro-Chancellor, it is my privilege and pleasure to present Reverend Alfred Joseph Deignan for the award of the degree of Doctor of Social Sciences honoris causa.