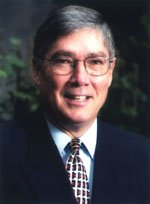 Gary Stephens has several hundred children. He also has many more mothers than is usually considered necessary. In acquiring this eccentrically extended family, he has greatly enriched himself in friendships, in Hong Kong, and in many places around the world where people live whose lives have been changed, and in some cases certainly saved, by his work and that of his colleagues.

On a wooded slope between Kennedy and Borrett Roads on Hong Kong Island, beneath the towering skyscrapers of the mid-levels and Central district, a white three-storey house lies hidden. You cannot see the house from the road; only after you have stepped away from the on-going traffic, and climbed the steps, edged with moss, for a while, does the house appear amidst the dappled shade. In this house - Montgomery House - is located "Mother’s Choice", the home for young Hong Kong girls facing crisis pregnancies, set up by Gary Stephens.

Gary Stephens began life on a farm in a small town in Colorado which is perhaps as inconspicuous as Montgomery House is now. It was, in many ways, an idyllic childhood where as a boy, the young Stephens busied himself with farm chores - gathering eggs, milking cows, feeding lambs. As he worked in nature and with nature, he also received his first instruction in religious beliefs from his parents especially his mother. And as he accompanied his mother to buy groceries for the poor and needy of the town, Gary Stephens began to glimpse what it meant to care for those who did not enjoy the advantages he had in his parents' love and family support.

At the University of Colorado, Gary Stephens became involved with Youth With A Mission, a Christian service organization which is multinational and trans-denominational, with 15000 full-time staff worldwide, all non-salaried, and more than a hundred thousand part-time volunteers. In his junior year, he took an eight-month break to go overseas with Youth With A Mission, thinking he was only going abroad for a short while. However, his life took a very different turn when he met his wife, Helen, in a Christian training school in Switzerland.

Shortly afterwards, in 1971, they were married, and instead of returning to the United States, Gary and Helen Stephens continued to work with Youth With A Mission centres in India and Afghanistan, until eventually, in late 1979, they arrived in Hong Kong. From the time of his arrival, for twenty three years in Hong Kong, Gary Stephens has worked quietly but tirelessly to offer and organize Youth With A Mission’s services to the Hong Kong community: in spreading the message of charity and social concern, in working with churches to promote ethical values, and in ministering to the poor and the needy.

Hong Kong in 1979 was reeling from the shock of the floods of Vietnamese refugees which rushed its shores. The Jubilee Camp in Lai Chi Kok which housed several thousands of these refugees had little by way of facilities; nor did the government at that time find it possible or necessary to offer more to those whom it considered unwelcome arrivals. Gary Stephens went into Jubilee Camp to see what he and his organization could do for the refugees, many of whom were battered by the violence of years of war and the perilous sea passage, and traumatized by the loss of family, home, and country.

Together with his team of volunteers, Mr Stephens set about to improve the conditions of the camp so that it could become a place the refugees could live in in some dignity if not exactly comfort. This began with manual work in improving sanitation and shelter facilities, and as the months and years passed, it extended to the provision of medical personnel, education, and recreation. To this day, Mr Pro-Chancellor, when Jubilee Camp has receded into the dim mist of Hong Kong's collective memory, Gary Stephens is remembered by those who were once in the camp as someone who cared for them and offered them warmth in the chill of their hostile reception and near despair. They had indeed been in a kind of prison, and Gary Stephens and his friends not only visited them, but helped with everything from unblocking the drains to setting up schools for the children. For practical purpose, Youth With A Mission ran the Jubilee Camp, a humanizing presence in a dehumanized environment.

In the late nineteen eighties, Gary Stephens became drawn to the plight of teenage girls in Hong Kong with crisis pregnancies who were crossing the border for late trimester abortions. In co-operation with Ranjan and Phyllis Marwah, he founded "Mother's Choice" which began as a home for these young girls, offering them temporary shelter until after delivery, and counselling to them and their families. As nature took its course, Gary Stephens and his co-workers soon found that they had much more on their hands, so to speak. "Mother's Choice" quickly grew into a care-centre for new-born infants, and a fostering programme offering for adoption babies whom their mothers could not bring up on their own. Official wariness about "Mother's Choice" when the project was first mooted with the Social Welfare Department was soon replaced by a recognition that there was a serious need for the creative initiative and organizational energy of a non-governmental charity worker like Gary Stephens.

Now in its fourteenth year, "Mother's Choice" offers services for pregnant girls, a baby care home, a "Wee Care" home for special needs children, three small group homes, and the adoption and fostering services. Gary and Helen Stephens continue to work unpaid. Mr Pro-Chancellor, the success of "Mother's Choice" is recognized not only in Hong Kong but also in mainland China. In 1991, at the invitation of the provincial government of Guangxi Autonomous Region, "Mothers Love", a joint venture project began in Nanning. "Mothers Love" is an orphanage that provides care for up to three hundred babies a year. It has become a model for orphanages throughout China, and since it was set up, has trained close to one thousand workers from all over the country. Volunteers who worked in "Mother's Choice" in Hong Kong have also set up similar projects in other countries; among these projects is "Mothers Hope" in Nagaland, India.

The refusal to turn away from those in distress, the determination to help the hopeless and despairing to regain faith in themselves, and above all, the unswerving belief in the right of the individual, and especially the child, to be loved – Gary Stephens has shown in his work how these cardinal principles of the good Christian can be practised so as to live a good life and serve humanity. Not only charitable in himself, he has also been a conduit and an encouragement for the charity of others, including all those generous members of the Hong Kong community who help to make his work possible.

Mr Pro-Chancellor, it is my pleasure to present Gary Stephens for the award of the degree of Doctor of Social Sciences, honoris causa.