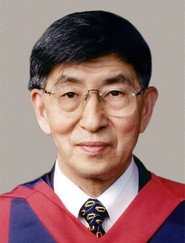 By virtue of his own qualities and achievements our next graduand is more than worthy of our accolade. But it seems even more fitting and appropriate that in the first Honorary Degrees Congregation held by our University after the reunification of Hong Kong with the Motherland we should honour the top man of China's top University. What is also significant is that it is under Professor Wang Dazhong's leadership that Tsinghua University has formed much closer ties with our University.

Wang Dazhong's field is nuclear engineering. His main contribution is to initiate the new field of nuclear heat application and to develop a nuclear heating reactor and a high temperature reactor in China. In particular Professor Wang has developed a vessel type nuclear reactor which possesses a number of advanced technological features. He was responsible for the design and construction of a 5 MW nuclear reactor, which was successfully put into operation in 1989, the first such reactor to be put into operation in the world.

Another first was achieved when Professor Wang and his colleagues designed and produced a commercial size nuclear heating reactor which can be used for district heating, industrial process heating, air conditioning and sea water desalination. This is now widely used in China, especially in the north-east. In addition Professor Wang is now engaged in the research and development of a high temperature gas cooled reactor. These are merely some of the achievements of a career devoted to scientific research and teaching.

Wang Dazhong was born in 1935 in Hebei Province. He graduated from Tsinghua's Department of Engineering Physics in 1958 and even while he was doing graduate research there he participated in leading a team involved in the research and construction of the first experimental nuclear reactor in Tsinghua. He continued to pursue research through the years 1965 to 1979, participating in leading research work on a thorium molten salt reactor and a high temperature gas cooled reactor.

He became Associate Professor in 1979 and from then on his promotion through the ranks was rapid. Between 1980 and 1982 Professor Wang was Visiting Scholar at the Nuclear Research Centre, Juelich and Aachen University of Technology, Aachen, Germany. He received the degree of Doctor of Science from the latter in 1982.

On his return to China he was put in charge of research and development projects relating to nuclear reactors. He became Deputy Director of the Institute of Nuclear Energy Technology of Tsinghua University in 1983 and Full Professor of Tsinghua in the following year. From 1985 to 1993 he was Director and Chief Engineer of the Institute of Nuclear Energy Technology. After a brief period as the Acting President he was appointed President of Tsinghua in 1994.

Since 1985 Professor Wang has been receiving honours and awards for his outstanding achievements; these include the title of National Outstanding Scientist in 1986 and 1987 and in 1992 the First Prize of the Chinese National Awards for the Advancement of Science and Technology. He is Academician of China's Academy of Sciences. He has also obtained nine patents on his nuclear heating reactor and high temperature gas cooled reactor in China, Germany, the United States and Japan. He has published a book and seventy learned papers.

I have been told that Professor Wang's first love is research, and now that he has such heavy administrative responsibilities, he still makes time to do research and to advise research students. In his days as an undergraduate Professor Wang had quite a reputation as a folk dancer; he was a prominent member of a student arts group which performed semi-professionally. It is feared he has little time to indulge in that early hobby these days.

No citation would be complete without more detailed reference to Wang Dazhong's links with Hong Kong and with our university. Tsinghua and the University of Hong Kong were established in the same year***1911, and, though separated geographically, have maintained ties of friendship and co-operation through the turbulent times of recent history. The links were strengthened with China's open-door policy. And since the appointment of Wang Dazhong to the presidency in 1994 these ties have become formalized. In 1994 nearly one hundred engineering students from HKU went to serve internships in Tsinghua and since 1995 there has been a regular exchange of students and teachers between the two universities.

A few days after the reunification of Hong Kong with China, on 4 July, through the initiative of Professor Wang and our Vice-Chancellor, the Hong Kong University-Tsinghua University Academic Exchange Centre was set up to facilitate exchanges between the two universities***to their mutual benefit. This collaboration is truly "a marriage of true minds", a union of two institutions sharing the same vision, the same aim of contributing to the modernization and development of the whole of China while keeping the Hong Kong SAR competitive internationally. Our University is beholden to Professor Wang for his role in these developments. As a postscript on the subject of Wang Dazhong's Hong Kong links his daughter has recently married a Hong Kong resident.

Mr Pro-Chancellor, in recognition of his services to education and his contribution towards collaboration between Hong Kong and the Inland, I present Professor Wang Dazhong for the degree of Doctor of Laws honoris causa.