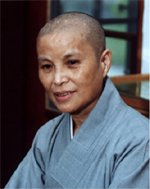 After a personal tragedy, the search for meaning in her life led the young Cheng Yen to the teachings of Buddha. At the age of twenty-five she entered the Pu Ming Temple in Hualien as a nun and began what was to be a lifetime of spiritual devotion and compassion for those in need. But not for her the sequestered life of cloistered isolation. Cheng Yen quickly realised that her compassion called for more than meditation and prayer. She decided to follow the path of engagement and involvement. This was to change not only her own life, but also the lives of millions of people throughout the world. She refused to turn away from the misery and suffering of the poor and the sick. Exhorting her followers to save a mere fifty cents a day, she began a programme that ignited the imagination of thousands of Taiwanese who opened their hearts to support what must then have seemed an impossible dream. By 1966, however, she had established the Tz'u-chi Contribution Society. Hundreds of needy Taiwanese began to benefit from the fruits of her labour. But that, Mr Pro-Chancellor, was merely the beginning.

In 1979, the Reverend Cheng Yen recognised that the scale of the problem required a larger solution. From donations, she raised the astounding sum of NT$700 million, and the Tz'u-Chi Buddhist General Hospital and college were born. The hospital boasts the most advanced medical equipment. It is not alone. A new hospital in Talin occupies forty-six acres of land, and has 1,000 beds, including 600 acute-care, and 400 chronic-care beds.

Tz'u-Chi promotes four major missions: charity, medical care, education, and culture. In 2000 a technical nursing college was established. It operates in partnership with the existing junior nursing college under the auspices of a new college entity, the Tz'u-Chi Technical College of Nursing. The Tz’u Chi College of Medicine, was established in 1994 with 142 students in the departments of medicine, public health, and medical technology.

It is difficult to convey the altitude of the peak Cheng Yen has climbed. Her charity has provided help and treatment for more than a million patients in numerous parts of the world including, Taiwan, the Mainland, Japan, Nepal, the Philippines, Australia, New Zealand, Singapore, Malaysia, North America, South America, the United Kingdom, Rwanda, South Africa, and Hong Kong. It played a significant role in assisting the victims of floods in China and Bangladesh, the earthquakes in Turkey and Taiwan. The assistance it provides to victims of natural disasters is on a massive scale. It raises the colossal sum of NT$3 billion per annum. These funds are deployed to help those who are most in need: the poor, the hungry, the infirm, and the down-trodden.

But this is merely a fraction of Cheng Yen's noble work. In 1993 the Tz'u-Chi Marrow Donor Registry was founded. In the next three years it collected data on more than 140,000 donors. Numerous bone marrow transplants have been carried out, including donations to several patients outside Taiwan, including those in Singapore, Canada, Australia, Japan, and Hong Kong. Many lives blighted by diseases of the blood have been saved. Of Cheng Yen her it may be justly remarked:

The reason firm, the temperate will,

To warn, to comfort, and command;

And yet a Spirit still, and bright

With something of angelic light.

Yet she is no mere spirit. She lives among us - a simple, ascetic life. Her quiet, benevolent dedication to the plight of the needy, the abject, and the suffering is a lesson to us all in our turbulent world of materialism and greed.

I commend Dharma Master Shih Cheng Yen to you, Mr Pro-Chancellor, for the award of Doctor of Social Science, honoris causa, in absentia.