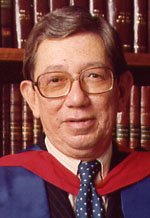 Mr Chancellor, I have the honour to present the Hon. Oswald Victor Cheung, Queen’s Counsel, Commander of the British Empire for the degree of Doctor of Laws honoris causa.

Oswald Cheung was born in Hong Kong in 1922 and, except for war service and a period at the University of Oxford, he has been here ever since. Mr Cheung attended the Diocesan Boys School until he matriculated in 1938. The records show that he entered this University in 1938 at the extraordinary young age of sixteen. Yet it is perhaps not revealed that the precocious Oswald, complete with matriculation, could have entered the portals of the University at the youthful age of fifteen – a situation quite unusual in the modern University world.

Oswald Cheung’s early intellectual discipline was mathematics and his keen mind quickly grasped its principles. He was to build upon this foundation somewhat later, hence the years 1938 to 1941 saw him studying here the natural sciences, but, perhaps with a diminishing degree of enthusiasm, as he began to look around for new fields to conquer – which he was to find later in law. The war of course intervened, and the traumatic occupation began.

Mr Cheung well recalls the fateful captive Christmas of 1941 – the bombing of Morrison Hill Road, the news of the fall of Kowloon, and the gradual take-over of the colony by Japanese soldiers.

The decision on what to do was soon made and the family set off for Macao and then onto China and to what was then the French Concession at Fort Bayard.

Inside China the war was a constant and fearful reality, particularly after 1943 as Japanese soldiers arrived at the concession. The pattern of life to which he grew accustomed was one of constant uncertainty; hence a trunk was always packed ready for instant departure. His duties in the war were distinctly James Bond-ish, carried out, we may be certain, in a characteristically capable way.

The end of the war – August 1945 – found him in Calcutta. Without delay he was on a Catalina Flying Boat not far behind Admiral Sir Cecil Harcourt and the resumption of British administration in Hong Kong. Peacetime was not of course a time of relaxation: in the late forties, work was the order of the day.

In 1947 Oswald Cheung set out for the study of law and University College Oxford. At Oxford he learned the Oxford virtues. They are constantly in evidence. There was much to learn there even if, as Arnold put it, Oxford is the home of “lost causes, and forsaken beliefs and unpopular names and impossible loyalties”. “Untruthful”, said Oscar Wilde, “My nephew Algernon? Impossible. He is an Oxonian”.

Yet it was a time for knowledge, for learning, and a ransacking of the great legal minds with a particular interest in the All Souls Library with its magnificent armory of legal authorities. Oxford behind him (for a while), he enrolled in Lincoln’s Inn, being called to the Bar in the year 1950 – just twenty-nine years ago.

The Barrister, is, by common consent, a man of many parts. He is an advocate, a man who presents pleas before a judge and often before a jury too. He needs qualities of character and intellect, such as those which were well set out by Samuel Butler: “We are not won by arguments that we can analyze but by tone and temper, by the manner which is the man himself.”

Hong Kong called (or perhaps re-called) him, and he immediately threw himself into his full professional life.

To list Oswald Cheung’s contribution to public service is indeed a most formidable undertaking. I can offer your Excellency only a small selection of these activities. It is a list of practical achievements. For, let us remember the comment of Dr Samuel Johnson who held that – “Lawyers know life practically. A bookish man should always have them to converse with”.

He has served on the Police Children’s Education Trust Management Committee and its Investment Advisory Board.

Mr Cheung has also been a member of the Sir David Trench Recreation Fund Investment Advisory Committee, and of a Committee concerned with recreation facilities in Yau Ma Tei. His services are also most valuable in directing the legal aspects MTRC on whose Board of Directors he sits. To his old school – the DBS need I say it, he has given sterling service.

We at the University have long recognised his work. For eight years he was a member of the Universities & Polytechnic Grants Committee which is a body established to liaise between those who provide funds (under Your Excellency’s auspices) and those who, like ourselves, gladly spend it. The UPGC is an important body because it suggests a form of allocation of funds to develop – perhaps for four years, perhaps for three years – those academic enterprises which the University deems appropriated for expansion. When Oswald Cheung first lent his experience to the UPGC, Hong Kong had perhaps 4,000 students at University. Today that figure, including the Polytechnic, approaches 17,000.

Mr Cheung is also a long-standing member of the Court of the University – the supreme body and the principal instrument – under yourself – of university government. Mr Chancellor, Oswald Cheung stands here today as a University man in his own right.

Honours of many sorts have liberally and deservedly been accorded to him from many quarters during the past ten years. In 1965 he took silk becoming a Queen’s Counsellor, and he became a Justice of the Peace three years later.

He was honoured by the Queen in 1972 with the OBE, and in 1976 he was distinguished further by the award of the CBE. Today we are hoping that you, as Chancellor, will take the honour a stage further, awarding him the doctorate, the University’s supreme tribute as a measure of our esteem for his talents, qualities and services.

Mr Chancellor, it is no small matter for a someone, even perhaps a Public Orator, to "take on" a barrister – particularly a QC of distinction.

But my great strength on this occasion Sir, is that this, our graduand, the acknowledged master of cross-examination, cannot use his forensic skill to answer back, for this is a citation against which (we hope) there is no further appeal. In a few minutes, however, when he is Dr Cheung, his opportunity to address the congregation will come.

The public will be well aware of Mr Cheung’s service on the Legislative Council on which he is currently the senior unofficial member. His interest in matters relating to the good order in our city is common knowledge. His understanding of finance of the art of investment – demonstrate the keen business mind applied to the duties and tasks of government.

He has naturally raised questions on a host of matters. Among these are subjects close to his professional concerns, but also many of a wide and general nature. A glance at Hansard would reveal that he has asked questions about the media, water shortage, medical degrees, the shortage of post-boxes, problems of the parker, even the delays on British Airways.

At the same time he has another great public concern. This is the Royal Hong Kong Regiment (the Volunteers). He served from 1956 to 1962 as Captain, and in 1977, was appointed on the recommendation of General Sir John Archer as Honorary Colonel of the Regiment, thus, in a sense, completing the cycle of conspicuous service which he began during World War II.

Mr Chancellor, while the study of the law includes a consideration of a number of abstractions which serve as a summary of human experience, it also operates at a more immediate level – at a level of solving problems. In this respect the lawyer is indeed fortunate, for he can attend both to a contemplation of ideals, as well as to the empirical data of everybody’s lives. Few indeed are the persons who, like Oswald Cheung, can operate at both of these levels.

In tribute to his forensic professional skills, as for his long and dedicated public service to HKU and Hong Kong in general over a period upward of a quarter of a century, I ask you to confer upon Oswald Victor Cheung, the degree of Doctor of Laws honoris causa.