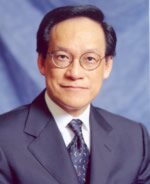 Professor Edward Chen is a man of diverse talents enjoying a most distinguished career as educator, administrator, public servant and economist. He was admitted into this University in 1964 to read economics graduating in 1967. Indeed it was only as the result of a historical accident that he looked to further education instead of the conventional and more lucrative path of joining the major hongs. The 1967 unrest in Hong Kong brought business activities to a standstill. Professor Chen decided, therefore, to continue his studies at Master's level and subsequently to pursue further studies overseas at Oxford University where he obtained his Doctor of Philosophy in economics. The chosen topic for his thesis was the newly industrialised economies of Asia and in his thesis he accurately predicted and explained the "hyper-growth" of these economies (Hong Kong, Korea, Singapore and Taiwan) soon to be known as the "four little dragons".

His affection for his alma mater was demonstrated when he returned to the fold as an Assistant Lecturer in 1970 rising to the rank of Chair Professor in 1986. From 1979 until 1995 he held the post of Director of the Centre of Asian Studies, a role he fulfilled with outstanding success. In particular he will be fondly remembered for establishing study programmes through which resources could be focused and research stimulated and also for his involvement in opening up the academic sector of the Mainland by building links (at a difficult period of time) with both Hong Kong and the outside world.

During this time Professor Chen held visiting appointments at the Universities of Yale, Oxford, Stockholm and California.

In 1995 Professor Chen left his alma mater to assume the challenging role of President of Lingnan University (then Lingnan College). One of his greatest challenges and most notable achievements was to create a distinctive liberal arts ( 博雅, 'Pok Nga' or 'Bo Ya') educational community (small, residential and student-centred) which was unique to Hong Kong and rarely seen outside the United States of America. During his 12 year term of office, Professor Chen enhanced teaching and research performance. In respect of the latter, the ratio of RAE Active Researchers rose from 12% in 1994 to 77% in 2006 which is a remarkable achievement in the context of a liberal arts institution laying heavy emphasis on teaching and learning and intense student-teacher contact. Professor Chen further developed and refined the liberal arts curriculum and made considerable improvements to the physical campus. One of his innovations was meeting students four times a week at breakfast, and regularly over lunch and dinner and he has probably consumed more food for the sake of education than most dieticians would recommend! He also oversaw the College's smooth transition to university status. Professor Chen voluntarily retired from the Presidency of Lingnan University last year but there can be no doubt that his influence will continue long into the future. Ralph Emerson's words are appropriate here: "An institution is the lengthened shadow of one man."

Professor Chen sees his most significant role, however, as a teacher and researcher. In this regard his interests focus on economic development problems with special reference to the Asian newly industrialized economies. He is particularly interested in the economics of technological change and has published extensively on these topics. He is a pioneer in studies on newly industrialized economies, publishing his seminal book entitled Hyper-Growth in Asian Economies in 1979. He has also conducted long-term and wide-ranging research into the changing patterns of foreign direct investment and the role of multinational corporations in economic development and technology transfer. His major publications include Multinational Corporations, Technology and Employment published in 1983, The New Multinationals published the same year, Foreign Direct Investment in Asia, published in 1990, Transnational Corporations and Technology Transfer in Developing Countries published in 1994 and Asia's Borderless Economy published in 1997. His impressive list of publications includes more than 100 articles on development economics.

Professor Chen was appointed a Justice of the Peace in 1993. He was awarded a CBE in 1995 and a Gold Bauhinia Star in 2003. In 2007, as a tribute and by way of showing their appreciation for Professor Chen's scholarship and teaching, a group of his early economics students at this University established the Edward KY Chen Distinguished Lecture Series. The lecture will be held annually and Professor Chen delivered the inaugural lecture in June 2007 entitled "From the NIEs to the BRICs: Development Theory Revisited". The lecture identified and contrasted in economic terms the rapid economic growth of the NIEs - the newly industrialising economies of Hong Kong, Singapore, South Korea and Taiwan - with the new model of development of the BRICs – Brazil, Russia, India and China, a topic that encapsulates his principal academic interest from his time as a postgraduate student to the present day.

Professor Chen may have retired from Lingnan University but he has certainly not retired from the pursuit of knowledge. Freed from the constraints of leading a prominent university, he is now eagerly devoting himself to pursuing his field of academic interest by lecturing, advising, traveling to conferences and serving as a consultant.

Finally, and this may not be widely known, he is a passionate 'horologist' - a collector of timepieces. His collection extends to more than 200 watches, almost all of which are mechanical and need to be wound up periodically; so every night he must set aside time to this task. Time is for Professor Chen a precious commodity and I must, appropriately, bring this citation to an end.

Mr Pro-Chancellor, it is my honour and pleasure to present Professor Edward Chen for the award of Doctor of Social Sciences, honoris causa.