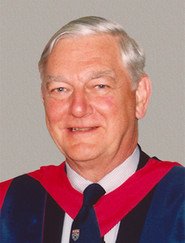 Sir William Purves was born in Kelso in 1931. He attended Kelso High School before entering a life in banking where he was to become a household name throughout the banking world and the Far East, in particular. His time in the bank was interrupted by National Service in Korea where he was awarded the DSO. Returning to the banking world in Scotland, he moved to the Hong Kong and Shanghai Banking Corporation in 1954 where he remained for the rest of his working life, becoming Chairman and Chief Executive in 1990, of what was now called HSBC Holdings Plc. He moved to London in 1992, when HSBC took over Midland Bank, he was still involved in the preparation of financial institutions for the handover of Hong Kong to China. Knighted in 1993 and awarded the GBM by Hong Kong in 1999, he is now living in London, retired, but, no doubt, busier than ever.