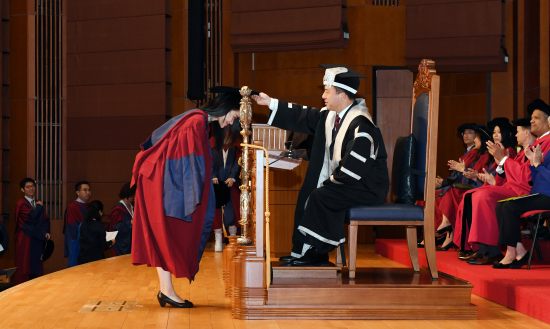 The Congregation is one of the most important events in the HKU calendar and a once-in-a-lifetime event for graduates. It is the annual ceremony held by the University to officially confer the respective degrees on students who are eligible for graduation.

When the ceremony begins, the University Anthem will be played and the University Procession in full academic regalia will proceed onto the stage. The Mace will be carried in University processions as the symbol of authority while the Mace-Bearer will always precede the Presiding Officer.

The Dean and designated members of the Faculty will present the candidates, after which the Presiding Officer will announce that candidates are admitted to their degrees. The ceremony will draw to a close after the degrees have been conferred, and other events and speeches as organised by the Faculty completed. Once the Presiding Officer has declared the ceremony closed, the Procession music will be played and the Procession will make its exit in reverse order.

The Mace is carried in University processions as the symbol of authority. The first Mace donated by Mr Ho Fook was in use from January 1918, but was lost during the Second World War. The replacement, which is a near replica, was given by Mr Leung Yew, and has been used since 1951. Made of silver gilt, it is 40 inches long and weighs about 300 ounces, the two collars being set with amber-red and green jade stones. The drum bears the University’s coat of arms enamelled in colour and encircled within a buckled belt displaying the motto. On each side of the drum are full-length, four-toed Chinese dragons.

The University Anthem was first performed at the Opening Ceremony of the University held on Monday, March 11, 1912, in front of the then newly completed Main Building.

It was performed by the Choir of the St John’s Cathedral, the Chorus of the Philharmonic Society, and the full Military Band of the 1st Battalion, King’s Own Yorkshire Light Infantry.

The music was composed by the organist of St John’s Cathedral Denman Fuller, and the Latin verses by the then Acting Colonial Secretary, and later Governor Sir Cecil Clementi.

Hearing the Anthem will transport you back a hundred years to Edwardian Britain. This is music of the Empire, with the pomp and circumstance of both the army and the church. The work is not an anthem in the sense of a national anthem that can be easily sung by all, but takes its bearing from the church anthem, with Latin verses that speak of the light of knowledge shining from the East.

The Anthem was used at formal University occasions until 1930s, but after the war it was largely forgotten, preserved in the archives as an historical curiosity that could be seen but seldom heard.

This century old anthem has been revived in 2011 and was premiered at the University’s Centenary Gala Dinner on 18 December 2011. The music has been reconstructed from the original parts, reorchestrated and recorded.

At the Congregation, the Anthem will be played when the Procession enters and leaves the hall.