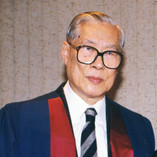 An excerpt from the Vice-Chancellor's Address delivered at the Honorary University Fellowships Presentation Ceremony on December 10, 1998:

Mr Patrick Yu Shuk Siu, one of the University’s favourite “sons”. Patrick Yu was born in 1922, the seventh of eleven children. His early schooling was at Wah Yan College whence he proceeded to the University of Hong Kong on a scholarship in 1938. The Japanese occupation of Hong Kong intervened, enabling him to earn a “war-time” Bachelor of Arts degree in 1941. His family went to the Chinese Mainland for the rest of the war, and Mr Yu secured a post in the Chinese National Army under Lieutenant-General Lee Yen-wor. In 1946 he became a “Victory Scholar” at Merton College, Oxford, and by 1950 he had completed his degree, qualified for the Bar, and enjoyed a year of pupilage in England. After what he calls in his memoirs “a year of mixed fortune in Malaya”, Mr Yu settled back into Hong Kong in 1951. He worked for a year as Crown Counsel in the Attorney General’s Chambers, but left when it was confirmed that he would not get “expatriate terms”. Thereafter he practiced at the private Bar, achieving great eminence. The only reason he did not take silk – that is, become a Queen’s Counsel – is that, out of principle, he declined to apply for the honour.

Among his services to the public was his membership of the University Grants Committee in the mid-1960s. In this capacity he was intimately involved with the creation of a Department of Law at his alma mater. Mr Yu is now retired. He has written entertainingly about his life and work in A Seventh Child and the Law, published by our University Press and proving to be one of our all-time bestsellers.