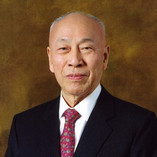 Excerpt from the Vice-Chancellor's Address delivered at the Honorary University Fellowships Presentation Ceremony on December 2, 1999:

Dr Li received his Bachelor of Accounting degree from Fudan University at Chungking in 1945, and since then has pursued a highly successful career in business. In Hong Kong he is Chairman of Sharp-Roxy (HK) Ltd and of Roxy Property Investment Co. Ltd., as well as Director of Hong Kong Television Broadcast Ltd. He also has extensive business interests in Malaysia, Singapore, Australia and New Zealand. In Malaysia he is Chairman of Sharp-Roxy Electronics Corporation (Malaysia), Johore and Kedah. He is also Principal Shareholder of other Sharp-Roxy joint venture companies. In Singapore, Australia and New Zealand he is Chairman of the Carlton Hotel Group.

Dr Li has achieved distinction not only through his business acumen but also through his community service and his generous support of education both in Hong Kong and on the Chinese mainland. He has served as Vice Chairman of the Tung Wah Group of hospitals and in capacities relating to his business and professional interests. He has also been active in helping his native Ningbo, donating RMB500,000 in 1993 to build the Ningbo City Rehabilitation Center for the Handicapped, and promoting the solidarity of former Ningbo residents in Hong Kong. But his most outstanding contribution is to education. His loyalty to his old school and university- Cheng Zhong Middle School, Shanghai and Fudan University respectively- is evident in the number and amounts of the donations given to these two institutions. Fudan in particular has benefited from his largesse: he provided the university with assistance in re-establishing the Department of Accountancy and a donation of HK$5million to build the Li Dak Sum Building to meet the developmental needs of the School of Management; he gave a further HK$1 million to the Department of Accountancy to fund teacher development and to purchase teaching equipment in1994; the following year he gave RMB3million to build a student sports and cultural activities centre. To Cheng Zhong Middle School he gave RMB3 million to build the Li Dak Sum Building and to rebuild the old school premises. He serves as a Member of Board of Trustee of Fudan University and Hon President of the Alumni Association of Cheng Zhong Middle School.

Mr. Li's generosity has extended to Hong Kong institutions. He has served as a Member of New Asia College's Board of Trustees; in 1979 he donated to the Chinese University of Hong Kong the sum of HK$3million to build the Li Dak Sum Building and to our Foundation for Educational Development and Research HK$1million in 1996.

To his other honours- he is a Justice of the Peace, holds an honorary doctorate from the Chinese University of Hong Kong, is a CPPCC Zhejiang Provincial Executive Committee Member and an Honorary Citizen of Ningbo- we wish to add one more title: Honorary Fellow of the University of Hong Kong. Allow me to extend our heartiest welcome into our growing HKU family to Dr Li Dak Sum in absentia.