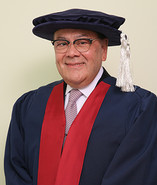 Mr Shek has 14 years of experience in the shipping industry, having started his career in the Swire Shipping Agencies Company Limited. He is recognized as a leader in the field, with extensive knowledge of the markets of the Americas, Europe, Asia and Africa. He was instrumental in the development of the industry in Hong Kong, growing it from break-bulk conventional shipping services to full-fledged containerization, and successfully transforming Hong Kong into the world’s leading container port. In this, Mr Shek is a ‘doer’.

Mr Shek was appointed as the first Kowloon-Canton Railway Corporation’s Commercial Director in 1984 to spearhead the transformation of its traditional railway services into a commercially-oriented quasi-government corporation specializing in the development of freight, passenger and other commercial activities.

His successful entrepreneurial initiatives led to his being headhunted by the Government to become the founding Chief Executive of the Land Development Corporation in 1987. His role was to improve land use in the urban core of Hong Kong by regenerating the dilapidated slums into new commercial and residential areas. Again, this Mr Shek successfully accomplished, with the help of cooperation and joint ventures between the private and public sectors. In hindsight, he feels that the greatest achievement of the Land Development Corporation was not the construction of skyscrapers but the re-housing of elderly and disadvantaged families from caged homes and slum dwellings into better residential units. That, Mr Shek noted, was its proudest moment.

Those who know him will affirm that this is not false modesty on Mr Shek’s part. To hear the testimonials that he is sensible, helpful in resolving problems or conflicts; that he is an excellent negotiator and mediator; that he is a man of principle but never imposes his principles upon others by his position; that he is polite and kind to all, including those who work for him – is to understand a little better how he has been able to aim so high and accomplish so much.

At the University of Hong Kong, Mr Shek is a current member of both Court and Council, and has lent his support and counsel to the University in many capacities, including inter alia, helping in the expansion of technology transfer initiatives, the development of business and entrepreneurial opportunities for graduate students, and the strengthening of long-term industry partnerships for the University.

Mr Shek is an Honorary Fellow of Lingnan University and of the Hong Kong University of Science and Technology. But he confided in me earlier this evening that he most values this one!  He was appointed a Justice of the Peace in 1995, awarded a Silver Bauhinia Star in 2007 and a Gold Bauhinia Star in 2013.

It gives me great pleasure, Mr Pro-Chancellor, to present the Honourable Abraham Shek Lai Him for the Honorary University Fellowship, in recognition of his contributions to Hong Kong and academia.