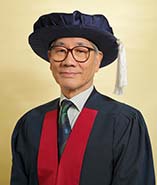 Every now and then, I would see some elegant people
walking down along the University path, looking like the high gods of Olympus,
and I said to myself: “One day, I am going to become one of them.”

These poignant thoughts of a secondary school student were to become the self-evident truth of the man we honour today.

For more than half a century, Professor Chow Shew-ping has been a treasured member of the University of Hong Kong, but first and foremost he is a world renowned orthopaedic surgeon in the areas of upper limb surgery and microsurgery.

He graduated from this University with an MBBS in 1968 – and just celebrated the milestone Golden Jubilee with his beloved classmates last week.

His pursuit of specialty training in orthopaedic surgery took him to the UK and the US; however, Professor Chow’s heart brought him home, to HKU where he joined the Department of Orthopaedics and Traumatology in 1973.

Few doctors can claim to hold a world record but Professor Chow’s experimental repair of blood vessels of 0.15 mm diameter – that’s barely the width of a human hair – was considered pioneering at the time and remains a world record.

He continued serving as an orthopaedic surgeon at Queen Mary Hospital for decades.

This Fellow of the Hong Kong Academy of Medicine (Orthopaedic Surgery) and the Royal College of Surgeons of Edinburgh has held esteemed positions in international professional bodies, and has served as an advisor to the Salvation Army, the Red Cross, and non-governmental organisations in special education.

Closer to home, he is Honorary President of the Hong Kong Physical Handicapped and Able-Bodied Association. In 2012, he was rightfully awarded a Silver Bauhinia Star.

But beyond the passionate, dedicated, accomplished medical professional, there is another side to this selfless-hearted man.

There is the steadfast champion of this University.

Professor Chow’s tenure spans a remarkable 50 years of noble service to HKU, and he has answered his alma mater’s call to leadership time and again, always bringing his invaluable insights, resourcefulness, and passion for education to the table then, and as emeritus ever since.

He was Chair Professor of the Department in 1990, and took up the mantle of Dean of Medicine from 1995 to 1998. As Dean, he shaped and reformed the curriculum, as well as planned and secured funding for the new medical complex on Sassoon Road.

His administrative acumen and mastery of taking action did not go unnoticed, and in 2008, he took up the portfolio of Pro-Vice-Chancellor for University Relations.

This appointment was set against the challenging background of expansion and change at HKU.

During his appointment, the new 4-year tertiary education system was introduced together with the brand new concept of college education; the much-needed Centennial Campus, home to the Faculties of Law, Arts and Social Sciences, was hewn from rock; and the curtain was raised on the Centenary Celebrations.

He seized every opportunity to rally support from all stakeholders of the University family. He spearheaded innovative fundraising initiatives, such as the Centenary Wine, to support students’ service learning, later known as the “Service 100” project.

In a consummate balancing act, Professor Chow still gave unswerving commitment of time and guidance to many voluntary and charity organisations.

And when unspeakable calamities hit ordinary lives, Professor Chow showed no hesitation to lend his expertise as a volunteer surgeon wherever he could. From the Chinese Mainland, Bangladesh, Africa, Indonesia, his footprints in this world are aplenty.

Professor Chow is a man of great character and of great heart. He is good and he is kind. And above all, he gets things done.

He embodies all the values that this University holds dear and all that is good about it.

Mr Pro-Chancellor, I am proud to present Professor Chow Shew-ping for the Honorary University Fellowship, in recognition of his contributions to the advancement of medicine and academia, and for a life lived in the service of humanity.