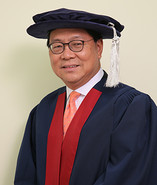 Professor Frederick Ma Si-hang is the Chairman of MTR Corporation Limited, former Secretary for Financial Services and the Treasury and former Secretary for Commerce and Economic Development of the Hong Kong SAR government. He is currently also an Independent Non-Executive Director of FWD Group, a Director of Husky Energy Inc., and a Non-Executive Director of the China National Cereals, Oils and Foodstuffs Corporation (COFCO Group).

Professor Ma was born and educated in Hong Kong. He graduated with a Bachelor of Arts (Honours) degree from the University of Hong Kong in 1973 majoring in economics and history. After graduation, he held different major positions of various local and overseas banks, financial institutions and major companies, including Chase Manhattan Bank, Royal Bank of Canada Dominion Securities, JP Morgan Chase, Kumagai Gumi (HK) Limited and Pacific Century Cyberworks Limited.  He has rich experience in banking and financial sector.

After living in New York, Toronto, London and Paris during a nearly 30-year career in business, Professor Ma joined the Hong Kong SAR Government as the Secretary for Financial Services and the Treasury in 2002, and subsequently assumed the post of Secretary for Commerce and Economic Development in 2007.

He brought his professional experience and his admirable ‘people-skills’ to these roles and aimed to strengthen Hong Kong’s overall financial health and its status as an international financial centre. Developing Hong Kong’s public bond market, enhancing its taxation-related competitiveness to attract overseas investors, increasing the operational efficiency of the railway transportation system, and working across bureaus to return the Government’s budget from deficit to surplus – these are just some of the arenas that Professor Ma successfully tackled.

It was a period of great opportunities and challenges that Professor Ma has described as being the “most fulfilling” in his career. But the stress and responsibilities would eventually encroach on an unexpected quarter: his health. Professor Ma resigned from the Government in 2008 due to medical reasons.

Perhaps we can venture to say that the Government’s loss has been academia’s gain!

At the University of Hong Kong, Professor Ma established the Frederick Ma Si Hang Scholarships from 2002 to 2006 for the award of five scholarships to undergraduate students in the Department of History. In 2008, he was appointed Honorary Professor in the HKU School of Economics and Finance, and has shared his experiences and expertise with our students and colleagues, particularly through the Wu Yee Sun Education Fund Lectures.

At the Hong Kong Polytechnic University, he is a Professor of Finance Practice in the Institute of Advanced Executive Education, and an Honorary Professor in the Faculty of Business Administration at the Chinese University of Hong Kong. He was conferred the degree of Honorary Doctor of Social Sciences by Lingnan University in 2014.

It gives me great pleasure, Mr Pro-Chancellor, to present Professor Frederick Ma Si-hang for the Honorary University Fellowship, in recognition of his contributions to Hong Kong and academia.