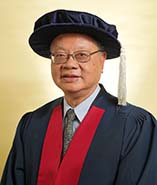 The alchemists of old could only dream of harnessing the elements. Yet Professor Lee Chack-fan has managed to almost do just that as a world authority in geotechnical engineering, landslide prevention, and hydropower. Lauded for his engineering work, behind this brilliant mind of science lies a man of letters.

Professor Lee graduated from HKU with bachelor and master degrees in Civil Engineering in 1968 and 1970 respectively. And it is at this University where his desire to serve the community planted its roots when he headed the Hong Kong Post-Secondary Social Service Team and helped build bridges, roads and dams for villages in the New Territories. If you ever happen to find yourself in Sai Kung, you can see one of those bridges, still standing and still serving the villagers.

His doctorate degree in geotechnical engineering took him to the University of Western Ontario, where he later taught before starting his 20-year long career with Ontario Hydro in Canada. He was involved in designing major hydroelectric and nuclear power stations, notably Darlington and Bruce for those familiar with the area; researching the disposal of both nuclear fuel waste and radioactive waste; and managing dam safety for 68 hydroelectric plants.

On returning to his alma mater in 1994, Professor Lee joined the Department of Civil Engineering, and was the Chair of Geotechnical Engineering from 1996 to 2008, the latter eight years of which he took up double duty as Pro-Vice-Chancellor – first overseeing Research, and then University Relations – before taking up directorship of HKU SPACE from which he retired in 2015.

Over the years, Professor Lee has published more than 280 journal papers and 15 monographs, and his research efforts led to the mitigation of the landslide disasters so prevalent in Hong Kong until the 1980s, and were used to guide prevention strategies in Mainland China.

The World Bank, the United Nations Development Plan, the Asian Development Bank, the International Atomic Energy Agency and the Canadian International Development Agency have all benefitted from his advice, as has the Hong Kong Government, which has sought his expertise from Public Works to Education.

Professor Lee has participated in the feasibility and design reviews of infrastructure projects across Mainland China, including the Daya Bay Project, but most notable of all he was a key advisor for one of the most advanced engineering feats of the modern world: the Three Gorges Project.  Highly regarded by the authorities, he is regularly consulted and called upon for major challenges, including disasters and large-scale development projects.

But the other side of Professor Lee is that of a Renaissance man whose passion for Chinese culture and the Buddhist faith led him to create two landmark academic institutes at HKU:  the Jao Tsung-I Petite Ecole to honour and preserve the great master’s teachings and works. And the Centre of Buddhist Studies, which has become an international hub for intellectuals in the pursuit of Buddhist teaching and studies.

He remains the Director of the Petite Ecole, as he has been since its inception, and has extended the impact of the Chinese maestro across Hong Kong society, in Mainland China, and further to the international community, in Britain, Japan and Europe.

A favourite subject of Professor Jao’s paintings was the lotus flower. Rooted in mud but emerging straight and pure, the lotus is known as “the gentleman of flowers”. This is perhaps also the perfect allegory for Professor Lee.

There can be no other man who can command such heartfelt and abiding respect for his immense contributions in the service of others.  He established the Fu Hui Education Foundation, which has donated millions to sponsor more than 10,000 under-privileged children in remote and impoverished regions.  From his intimate links to many rural areas in Mainland China, to his work for the preservation of Dunhuang art and heritage – Professor Lee’s personal involvement in and passion for all that he does encourages others to follow suit.  Although he is an engineer, one will always find him on the list of advisor to museums, cultural and heritage initiatives, no less the West Kowloon Cultural District project.

It is much to the good fortune of this University that Professor Lee has blessed us with his wisdom and kindness. He has opened doors for new ways of thinking, nurtured the younger generations, whether as teacher, pioneer, community leader, or the inaugural Master of Lap-Chee College for 500 students.  He has always created a positive force on the path to greatness.

This standard-bearer. This alchemist. This man of steadfast principles who leads by example, and a tireless friend of those in need. Professor Lee is unassuming and compassionate, and his many achievements remind us of the values and commitment of generations of HKU alumni.

Mr Pro-Chancellor, in recognition of his extraordinary contributions to engineering, Chinese culture and Buddhism, and for his outstanding scholarship and humanitarian deeds, it gives me great pleasure to present our distinguished colleague and loyal alumnus Professor Lee Chack-fan for the Honorary University Fellowship.