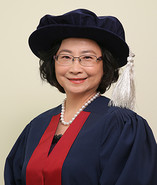 Mrs Margaret Leung is a respected leader in the banking sector and currently the Chief Executive, Deputy Chairman and Managing Director of Chong Hing Bank.

She graduated from HKU with a Bachelor of Social Sciences degree, majoring in Economics, Accounting and Business Administration.

Over the course of her long and distinguished career in banking, she has served as the Vice-Chairman and Chief Executive of Hang Seng Bank Limited, Group General Manager of HSBC Holdings plc, Global Co-Head of Commercial Banking at the HSBC Group, and Director of Wells Fargo HSBC Trade Bank N.A.

She was appointed a Justice of the Peace in 2009 and awarded a Silver  Bauhinia Star in 2012.

Mr Pro-Chancellor, this is a stellar curriculum vitae that few could match and even the best of Mrs Leung’s peers must respect -- if not envy!

But while Mrs Leung’s career and the long list of distinguished titles she holds is nothing short of exemplary – there is certainly another side to Mrs Leung that I would like to share with you.

Early on in her career, Mrs Leung had a chance to relocate from Hong Kong to Melbourne, Australia, with HSBC, as a credit controller.

About this, she has said: “I was told it would not be right for a woman to leave her family in Hong Kong … Throughout my career, my good friends and competitors have told me to take an easier path.”

However,she also added: “But I don’t give up easily. Nor do I accept stereotypes.”

It should be no surprise then, that she went to Melbourne!

Throughout her career, Mrs Leung has had to face and overcome similar gender expectations, while always pushing herself to embrace change and try new things.

Today, we can see that she has blazed a trail for herself in the highly competitive world of banking. Her ambition, self-respect and determination to broaden her horizons should serve as an inspiration to us all.  Mrs Leung is a strong promoter of diversity and women in business, and in addition to acting as a role model, she takes part in local and overseas diversity events as speaker as well as participant.

Here at HKU, we are very fortunate that Mrs Leung is an active supporter of her alma mater. She is a Court and Council Member, the University’s Treasurer, and has helped encourage and guide our students as a Mentor.  In 2013, she chaired the Steering Committee on the Gleneagles Hong Kong Hospital Project.  She now chairs a Review Panel on HKU’s participation in the HKU-Shenzhen Hospital.

Mrs Leung also contributes to education through other institutions, including the Business School Advisory Council of the Hong Kong University of Science and Technology, the Chinese University of Hong Kong (until 2015), the Hong Kong Polytechnic University’s International Board, Hong Kong Baptist University, and the Hang Seng Management College.

It gives me great pleasure, Mr Pro-Chancellor, to present Mrs Margaret Leung Ko May Yee for the Honorary University Fellowship, in recognition of her contributions to Hong Kong and academia.