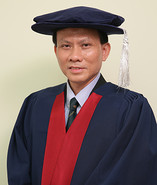 “News is what someone doesn’t want printed. All else is advertising.” This quote has been attributed to many, including the renowned author George Orwell. But if its attribution is uncertain, its exhortation to question, to challenge and to investigate is not, and it is surely a mantra the best journalists know and live by.

Mr Man Cheuk Fei is a distinguished journalist, Publisher and Chief Executive Officer of Master Insight Media Limited and an outstanding example of this spirit of inquiry.

Mr Man is a graduate of the University of Hong Kong, studying here in the Department of Chinese, and was conferred a Bachelor of Arts degree in 1987. His loyalty to HKU began during these undergraduate years, when he participated in different student bodies, including as the elected Internal Vice-President of the Students’ Union and a Tutor of the Old Halls.

In 1990, he joined Next Magazine as a political reporter – thus beginning his career in journalism. He subsequently became the founding Editor-in-Chief of Teacher Plus, a monthly magazine for Hong Kong educators. In 1992, he joined the Hong Kong Economic Journal (HKEJ) as Editor/Writer of the Commentary section. He became Assistant Chief Editor in early 2000 and served as Chief Editor of HKEJ Monthly from 2001 to 2013. He launched Master Insight Media in 2014, and is Publisher and CEO of the media group.

He has published five books and is currently completing his sixth.

A believer in lifelong education, Mr Man received a scholarship in 1994 for a media management program at the Poynter Institute for Media Studies in St Petersburg, Florida, in the United States. In 1999, he received his MPhil in Government and Public Administration from the Chinese University of Hong Kong. In 2000, he was offered both a Knight Fellowship from Stanford and a Nieman Fellowship from Harvard. He chose Stanford. From 2011-2012, he attended on scholarship an EMBA media course at Tsinghua University’s School of Economics and Management.

In spirit, you could say that Mr Man never left HKU. He served as a Convocation Standing Committee Member from 2003-2013, a Court Member from 2004-2016, and Council Member from 2007-2016. During his service at Council, he was appointed Chairperson of the Discrimination Complaints Committee, and has served on the Grievances Panel for Staff, the Council’s Group to Hear Appeals of Disciplinary Committee Cases and the Committee for the Selection of Wardens and Hall Tutors.

Mr Pro-Chancellor, we have seen how the need to question and inquire has permeated so much of Mr Man’s life. But perhaps there is another way to look at it.

Can we say instead that his has been a lifelong quest for answers? And in that quest, he has touched many lives along the way. He has provided – if not always answers – then at least objective analysis, intellectual inquiry and greater clarity to the issues at hand. In this sense, he is not telling us what we want to hear, but what we need to hear.

Perhaps Mr Man might agree with CNN’s Christiane Amanpour when she says: “I believe that good journalism … can make our world a better place.”

It gives me great pleasure, Mr Pro-Chancellor, to present Mr Man Cheuk Fei for the Honorary University Fellowship, in recognition of his contributions to Hong Kong, to academia and to making the world a better place.