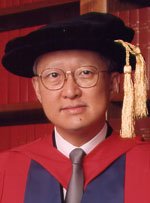 On behalf of my fellow honorary graduates and myself, I wish to express our sincere gratitude to the University for the high honours which have been conferred on us and for the kind citations. We are very proud to be admitted to the distinguished rank of honorary graduates of this great university. It is an award which we shall treasure.

Conscious that I am in the company of eminent fellow honorary graduates who have achieved the greatest distinction in many varied fields of human endeavour, it is an honour which I accept with deep humility. It also gives me the greatest pleasure since both my grandfather and my wife graduated from this university. My grandfather studied arts and was among the 28 graduates who were awarded their degrees at the First Congregation of this University held in December 1916.

It is now some three decades ago since I started my working life after graduation from university and the completion of professional training. During this time, the world has seen the most momentous changes. The most amazing advances have been made in science, technology and medicine. And the geopolitics have changed completely, with the disappearance of the Cold War, the disintegration of the Soviet and Eastern bloc, the development of European Union, the growth of Asia and the emergence of a modern and strong China, my Motherland, with Hong Kong now re-unified with her. Hong Kong itself has been transformed from a colony to a Special Administrative Region of China, and one of her most modern cities with the status of an international financial centre.

As we face the future in the new millennium, we can only be certain of one thing. With increasing globalization and the revolution in information technology, not only will there continue to be rapid changes but the pace of change is likely to accelerate in all fields of human activity.

To meet the exciting challenges of the future, creativity and innovation will be the keys to human progress and the betterment of mankind. Education will assume an even greater importance than before and societies which provide better education will be able to achieve faster economic growth and quicker social progress for their people.

All levels of education are equally important. Indeed, life long education is now essential in this fast changing world. But having regard to my own experience from serving on the University Grants Committee and governing bodies of universities, I would like today to venture a few thoughts on tertiary education. These have nothing to do with the responsibilities of my present office and represent my personal views. Some thoughts are of general application whilst others are of particular relevance to the circumstances of Hong Kong.

The basic mission of a university is teaching and research. It is a community of learned men and women. As has been wisely observed, 'a university should be a place of light, of liberty and of learning'. Universities enjoy institutional autonomy and academic freedom. They are essential institutions in a civil society.

Through teaching, students do not merely acquire knowledge which will soon be out of date. What is more important is that they understand the values of our society and are taught the means to educate themselves throughout life and to develop an inquiring mind, to ask questions and to challenge orthodox thinking. Through research, a university contributes to the knowledge of mankind and to the enrichment of humanity.

It is fashionable nowadays to compare a university to a large scale corporation and to compare the responsibilities of its vice-chancellor or president to those of the chief executive of such a corporation. A university of course has substantial assets and resources which must be managed and managed effectively and efficiently. No doubt, modern business management skills and methodologies can be usefully applied or adapted for the governance of a university. The qualities required of its vice-chancellor or president certainly include those of an able administrator.

Further, the community is investing substantially at all levels of education. As far as Hong Kong is concerned, recurrent public expenditure on education is and has been running at just over 20% of total recurrent public expenditure. This represents just over 4% of Gross Domestic Product. Expenditure on tertiary education is and has been at around 35% of the education budget. With such substantial public funds invested, it is right that there should be sufficient public transparency and accountability to demonstrate that the community's resources are well invested.

That said, the point I wish to make and make with some emphasis is that the analogy between a university and a business corporation must not be pressed too far. Having regard to the nature of its mission, a university cannot be treated like a business in the full sense. There are no profits to be made and students cannot be treated as units of production. The fruits of a university are in many respects intangible, and cannot be measured in monetary or materialistic terms. One cannot and should not try to put a dollar tag on the expansion of the frontiers of knowledge and the nurturing of the human mind and spirit.

In the Hong Kong context, conflicting views have been expressed on the costs of tertiary education. Some maintain that they are too high when compared with overseas institutions whilst others argue that they are not. It may be that this debate to be meaningful must take into account the level of costs in Hong Kong generally.

Following a period of rapid and unprecedented expansion in tertiary education in the early 1990's, we are now in a period of consolidation when efforts must centre on the maintenance and improvement of quality. The expansion took place in rosier economic times when public finances were in a buoyant state. Now that we are facing leaner times, it is understandable that there should be greater stringency in funding.

All over the world, reduction in tertiary education funding gives rise to controversy. The process for the institutions can be a painful one and would put to the test the institutions' management capability. However, reduction may depending on the circumstances be justified.

But the aim must only be to cut out such fat if any as there is in the system. One must not get to and damage the bone. It must be borne in mind that it may not be easy to judge how close one is to the bone. This is a delicate matter that requires cautious judgment.

In a period of consolidation, one often hears murmurs of mergers. It is doubtful whether successful mergers could ever be forced. They could only succeed when based on strong common bonds and interests. With a number of tertiary institutions, the community does have the benefit of diversity. It would not be in the community's interests if all our tertiary institutions aim to be the same type of institution playing the same role. The various institutions have different and complementary roles to make up the whole fabric of the tertiary education sector.

As far as public funding is concerned, it is now an appropriate time to consider the liberalization of the rules and conventions relating to public funding in order to give greater flexibility to institutions in the use of resources. For example, there may well be a case for allowing them flexibility in the terms and conditions they offer to enable them to attract top talent. Another matter worthy of examination is the question of the funding implications where student targets are not met because strict standards are maintained and students are failed. A funding formula based on student numbers with no flexibility will mean that funding will be reduced when targets are not met for this reason. Some leeway in meeting student number targets can be considered when the reason for not meeting them is the maintenance of rigorous standards.

There is a limit to which the public purse can fund tertiary education, as there are many competing demands on it. Many top universities outside Hong Kong are either entirely or substantially privately funded. In this centre of capitalism, although many citizens have donated generously, our universities at present do not have substantial private endowments. Whilst this was perhaps understandable when Hong Kong under colonial administration was considered to be a borrowed place on borrowed time, this is no longer so with re-unification. We are in our own place in our own time. Hopefully, a stronger tradition of philanthropy in relation to our universities will be gradually developed.

These are some of my thoughts on tertiary education. Those who agree with them may consider that a former chairman of the University Grants Committee still has a few words of wisdom to offer. Those who disagree may consider these thoughts to be the utterances of one who is somewhat out of touch with the current scene in tertiary education. I hope it provides food for thought for all concerned.

Pro-Chancellor, Vice-Chancellor, this year will mark the 90th anniversary of your University. The University's vision is stated to be to seek, as a pre-eminent international university in Asia, 'to sustain and enhance its excellence as an institution of higher learning through outstanding teaching and world-class research so as to produce well-rounded graduates with lifelong abilities to provide leadership within the societies they serve'.

May I, on behalf of my fellow honorary graduates and myself, offer our warmest congratulations on your 90th anniversary. We are sure you will go from strength to strength in fulfilling your vision and we wish you every success in the future.